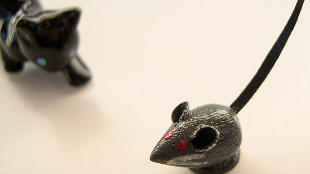 FLICKR, PEARLZENITHTwo decades ago, researchers discovered that Toxoplasma gondii infection causes rodents to lose their innate fear of cats, the animal hosts in which the parasite completes its life cycle. Now, research published today (September 18) in PLOS ONE suggests that such loss of fear is a permanent behavioral change, observed even in rodents where the parasite is no longer found.

T. gondii is a common protozoan that reproduces in the guts of felines and has captured public imagination in recent years for studies associating it with everything from schizophrenia to suicide to traffic accidents. But long before researchers began investigating T. gondii’s effects on humans, they studied its impacts on other mammals, particularly rodents. One of the things they found was that chronic infection of T. gondii caused rats to no longer fear the smell of cat urine, a phenomenon dubbed “fatal feline attraction” by Joanne Webster...

“Other than the hyperaggression that follows rabies, this is the only really specific behavior change that has been observed in mammals” as a result of parasite manipulation, said Wendy Ingram, a graduate student at the University of California, Berkeley, and lead author on the present study.

Most T. gondii isolates belong to one of three slightly different genetic strains. Ingram’s team set out to confirm whether the two lesser-studied strains, types I and III, impact fear of predators in mice in the same manner as the more commonly investigated type II has shown to.

T. gondii type I is highly lethal in mice, which has traditionally prevented researchers from studying its effects on mouse behavior. But by removing just five genes, a lab led by John Boothroyd at the Stanford University School of Medicine developed a non-virulent type I strain in 2011, which made it possible for Ingram and her colleagues to study the parasite’s effects on mouse behavior for the first time.

Using a computerized photobeam system, Ingram’s team mapped the movements of individual mice within cages containing a dish of either bobcat or rabbit urine at one end. Rabbit urine served as a control, and as expected, both the mice that were infected with this engineered, non-lethal T. gondii strain and those that were not spent equal time near the substance as at the far side of the cage, showing no fear of it. Also as expected, the uninfected mice showed a marked aversion to the bobcat urine, avoiding that side of the cage.

In contrast, the mice infected with type I or type III strains of T. gondii exhibited no aversion to the bobcat urine. “There were no ‘non-responders’ in either infection group, nor did the effect diminish with time,” the team wrote in its paper. “These data show that the ability of T. gondii to disrupt innate predator aversion extends to all three major parasite types.”

The confirmation that all three types of T. gondii caused rodents to lose their fear of predator urine was less of a surprise to the researchers than what they found in the brains of infected mice after the initial behavioral experiments had ended. Mice that had been inoculated with the engineered, non-lethal type I strain of T. gondii showed parasite loads in their brains that were indistinguishable from uninfected mice. But while the parasite was virtually undetectable, the mice still exhibited no fear of predator urine.

Previous studies have proposed that this behavioral change could be due to brain inflammation or the characteristic cysts that T. gondii causes in mice brains. Ingram’s team proposed that some other mechanism, perhaps proteins inserted into host cells by T. gondii, must be responsible instead.

“Overall, I think this paper represents a highly valuable addition to the current literature,” said Webster, who is now a professor of parasitic diseases at Imperial College London. She added that the study indicates that, “at least under certain conditions, timings and/or indeed host-parasite combinations, such fatal feline attraction behavioral changes may be hard-wired and persistent—which could have significant evolutionary and applied implications and applications.”

Webster questioned the study’s use of mice rather than rats, which are the preferred model among T. gondii researchers because they are less likely than mice to grow sick or die from such parasitic infection. However, she noted the use of mice didn’t detract from the key findings.

Ingram believes this kind of research could ultimately change the way we think about infectious disease. The current thought, she said, is that when “you get sick with something, you go to the doctor, and they give you a drug that makes it go away. . . . Get rid of the bug and you get rid of the symptoms.”

In the case of T. gondii-infected mice, though, “you’ve gotten rid of the bug and you still have a symptom,” she said. Ingram added that she suspects this may not be the only case of a change persisting after an infection has disappeared.