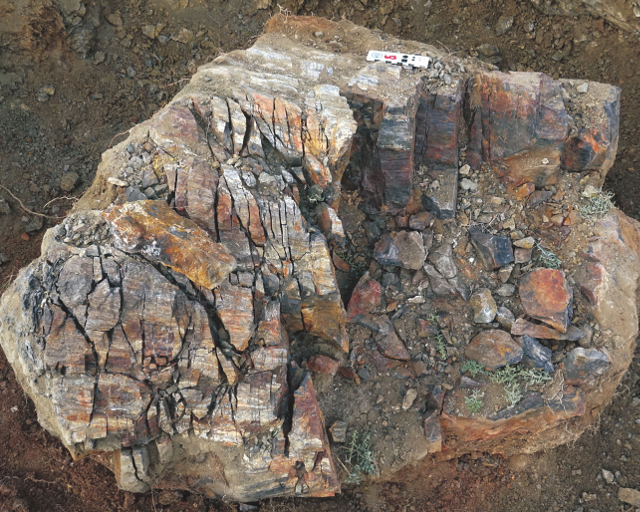 A Xinicaulis tree trunk fossilPNASDuring the Devonian period, from about 420 million to 359 million years ago, complex terrestrial plant life really took off. The first rooted plants evolved, and by the end of the period, forests had colonized the environment, sucking up vast amounts of carbon, driving down global temperatures, and creating an entirely new kind of ecosystem.

Fossils of those first trees, cladoxylopsids, can still be seen in places such as Gilboa in the Catskill Mountains of upstate New York, where stumps up to 2 meters in diameter beckon visitors to imagine what the Earth might have looked like back before the dinosaurs. Even for paleobotanists, the arboreal remains—and cladoxylopsid remnants from other sites—left a lot to the imagination. 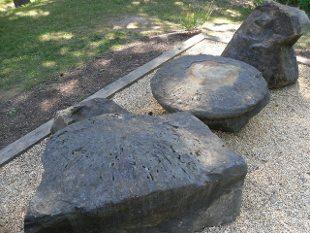 Cladoxylopsid remnants at the Gilboa fossil forest in New York StateFLICKR/DOUG KERRResearchers could tell that the trees had lacked wood, but what they couldn’t...

Then, in 2012, Hong-He Xu, a former postdoc of Berry now at the Nanjing Institute of Geology and Paleontology, unearthed a 15-centimeter cladoxylopsid stump in China’s northwest corner, not far from the Kazakhstan border. The fossil’s structures had been replaced by minerals over time, preserving them in rock. He brought the specimen to Cardiff, and to get a good look at it, Xu and Berry sliced the tree up, polished it, and etched it with hydrofluoric acid.

As they continued their study, Xu returned to the same field site in China, and in 2015, found another cladoxylopsid, this one 70 centimeters in diameter. “It’s so big he had to go and get lessons from people who dig up dinosaurs in order to be able to dig this thing out and take it back to Nanjing. It weighs about a ton,” Berry says. “That was the one that allowed us to tell how it got from a small tree to a really big tree.”

That growth process, and the structure it produced, turned out not to be straightforward. The trees’ woody fibers—namely, xylem, which carries water up the trunk—formed rings in the outer part of the trunk and connected to one another by horizontal strands, says Berry. Soft tissue filled the spaces between the fibrous network. As the trees grew outward, the xylem slowly ripped apart to accommodate the expansion, then knitted itself back together.

The cores of the trees were hollow. While the architecture allowed the trees to support their weight as they expanded, they also caused what Stein terms a “structural failure”: the weight bearing down on the tree’s base caused it to deform, becoming significantly wider than the rest of the trunk.

In contrast, a typical modern tree “adds wood around the outside of the trunk, grows growth rings, and that’s it . . . you’d think that the earliest trees would be the most simple ones, but obviously there’s something very, very complex going on here,” Berry says. 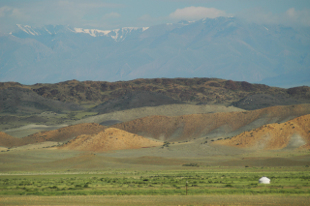 The field site in Xinjiang Province, China, where the Xinicaulis fossils were foundCHRIS BERRY“Wow, finally we know how it grew, and it’s so impressive because it’s kind of this very important plant in the history of paleontology and paleobotany in general,” says Cyrille Prestianni, a paleobotanist at the Royal Belgian Institute of Natural Sciences who was not involved in the study. “The Gilboa tree is the first tree ever, it is so well known around the world, it has had so many explanations—and this is really a good one.”

The team’s findings on the trees, which they dubbed Xinicaulis lignescens, appeared yesterday (October 23) in the PNAS.

Philippe Gerrienne, a paleobotanist at the University of Liège in Belgium who has collaborated with Berry in the past but was not involved in this study, calls the study “a brilliant illustration of how the earliest trees were constructed and grew.” In an email to The Scientist, he predicts that the finding “will stimulate other studies of comparable plants, in order to find the answer to the crucial question: ‘Why did some plants become trees?’ . . . Obviously, being a tree makes your life far easier—you are bigger, stronger; your life is much longer—but it is not that easy,” because of the challenges of accruing enough organic matter and support to grow so large, he notes. “[W]e do not know for sure why some plants chose this risky and costly evolutionary strategy.”