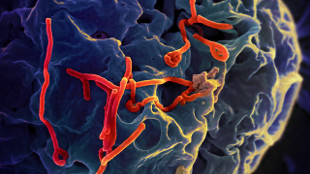 Particles of Ebola virus (orange) bud off from the surface of a monkey epithelial cell.FLICKR, NIAID

The spread of the Ebola virus in West Africa dominated headlines during the second half of the year. To date, more than 18,000 people have been infected with Ebola, and nearly 7,000 have died, according to the World Health Organization (WHO). While grim, these statistics are lower than the dire predictions released by the WHO and the US Centers for Disease Control and Prevention (CDC) earlier this year. And a recent epidemiological analysis suggested that the number of unreported cases is lower than previous estimates.

In September, the United Nations Security Council declared the Ebola epidemic a “threat to international peace and security,” spurring large-scale international aid efforts, which have helped to curb the spread of the disease, particularly in Liberia. “But the outbreak continues to surge in Sierra Leone,...

Fast-tracked funding and approval processes have boosted research on Ebola vaccines and treatments. A vaccine developed by the NIH and GlaxoSmithKline, as well as therapies that use blood transfusions from Ebola survivors, have entered clinical trials and have shown promising early results. Several other vaccine candidates are in the pipeline, and researchers at the NIH’s National Center for Advancing Translational Sciences (NCATS) recently identified 53 already-approved drugs that could be repurposed into anti-Ebola therapies.

Scientists are also continuing to examine the deadly virus’s basic biology. In August, an international team published the genome sequences of 99 Ebola isolates, revealing mutations with potential implications for diagnostics, vaccines, and therapies. And in October, investigators from the University of Washington and the NIH reported that previously overlooked mouse genotypes could recapitulate human-like symptoms of Ebola, including hemorrhagic fever.

In October, the US government put a temporary halt on gain-of-function research involving viruses such as influenza, SARS, and Middle East respiratory syndrome (MERS). The decision came in the wake of an anthrax mishap at the CDC in June and the discovery of forgotten smallpox samples on the NIH campus in July. The White House Office of Science and Technology Policy and the Department of Health and Human Services (HHS) are now formally evaluating the risks of experiments aimed at manipulating the capabilities of pathogens. In September, HHS issued a new set of policies for research on 15 pathogens of potential interest to bioterrorists, known as dual-use agents.

At least five of the 18 projects affected by the gain-of-function moratorium involved research on MERS, a coronavirus that is causing a growing number of human infections in the Middle East. Last week (December 18), the NIH granted an exemption to scientists working to develop mouse models to study MERS, ScienceInsider reported.

Hundreds of MERS cases have been reported to the WHO this year; as of June 11, the organization had recorded more than 300 deaths from the virus since 2012. In May, the WHO announced that there is no evidence of human-to-human transmission of the virus, but urged a ramping up of research efforts and increased infection control measures.

Scientists at Colorado State University recently reported that dromedary camels can become infected and shed large amounts of virus through their noses, confirming camels as a MERS reservoir and informing the development of a potential vaccine for camels. Earlier this year, a group of investigators successfully cultured the virus in monkey cells, while another team detected human antibodies that recognize it. A third group of researchers identified a small molecule that interferes with the replication of MERS and other coronaviruses within specialized vesicles.

This fall, enterovirus D68 (EV-D68) caused serious respiratory illness in more than 1,000 people—mainly children—in the U.S., according to the CDC. While the spread of the virus appears to be slowing, the reasons for its re-emergence this year remain unclear. Some answers may come from the virus’s genome, which was sequenced by researchers at Washington University in St. Louis; the information will also guide the development of new diagnostics, according to the study’s authors.

Poliovirus re-emerged in Pakistan this year, infecting at least 200 people.  Mistrust and sabotage of vaccination workers have contributed to the outbreak. Global vaccination campaigns have made tremendous progress toward eliminating the virus, but infections have also cropped up in Syria, Cameroon, Afghanistan, Iraq, and Equatorial Guinea, causing the WHO to declare a public health emergency in May. The WHO is now supplementing the oral polio vaccine, a live attenuated virus, with boosters of the inactivated polio vaccine. In August, researchers reported that this approach improves children’s immune responses against the virus.

“This study resolves a more than 50-year debate—dating back to the time of Jonas Salk and Albert Sabin—as to which vaccine is better,” study coauthor Roland Sutter of the WHO said during a press briefing. “The answer is now very clear: both vaccines complement one another, and should be used to interrupt the final chains of transmission to attain a polio-free world in the most rapid and effective way possible.”