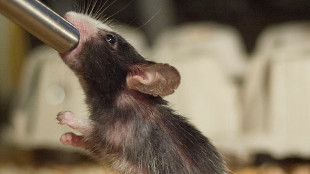 WIKIMEDIA, TIIA MONTOTwo genetically different sets of neurons control a mouse’s thirst for water, a team of scientists from Columbia University reported today (January 26) in Nature. While the activation of one group of excitatory neurons triggers the mice to avidly lap up water, the other group causes even parched mice to shun a readily available drink.

“It’s a very elegant study using optogenetics to identify separate cell populations that clearly act in opposite ways on thirst,” said Joseph Verbalis of Georgetown University, who was not involved in the study.

The researchers, led by Yuki Oka (who is now at Caltech), had previously explored the question of how the body maintains balance between salt and water intake by studying the neurobiology of salt tasting. In an attempt to understand how the brain controls the desire for water, the researchers looked for neurons in the subfornical organ (SFO)—a region...

Since “you can’t really directly connect the activation of a specific region to drinking behavior or motivation,” Oka explained, he and his colleagues used optogenetics to study only the neurons they were interested in. The researchers engineered mice with light-sensitive versions of the ETV-1-positive neurons. When they stimulated these neurons with a laser, mice that were not thirsty licked as greedily at their water as dehydrated mice, drinking up to 8 percent of their body weight. As soon as the laser was turned off, the mice lost interest in the water. Activating the neurons did not trigger feeding or the drinking of non-water liquids, demonstrating the specificity of the neurons for water.

The scientists also identified a separate and previously unknown group of inhibitory neurons in the SFO that had the opposite effect. When light-sensitive versions of these neurons were activated, the mice stopped drinking, even if they were dehydrated. Since previous studies that stimulated the entire SFO resulted in a drinking behavior, the discovery of the inhibitory neurons “creates the need for us to go back and figure out exactly what we were activating,” said Derek Daniels of University at Buffalo in New York who was not involved in the work.

It is as yet unclear whether these two groups of neurons operate to control thirst in other mammals. “Probably 98 percent of the research in thirst has focused on rats,” said Alan Johnson of the University of Iowa who was also not involved in the study. Previously, other researchers have noted differences in the thirst responses between rats and mice, Daniels added.

The two sets of neurons identified by Oka and his colleagues in mice may form only a part of a network involved in sensing dehydration and driving thirst. “There are multiple kinds of thirst,” Johnson explained. “A full analysis would involve different ways of inducing thirst.”

Additionally, there are also other brain regions that could be “controlling thirst in addition to the SFO or maybe in a collaborative fashion,” said Oka. For example, patients with thirst disorders often have lesions in a different brain area called the organum vasculosum of the lamina terminalis, or OVLT, Verbalis said. Both regions lack the blood-brain barrier, potentially allowing them to sense osmolarity changes that could drive thirst.

Still, the identification of the neurons will likely serve as a springboard for future research. “This study I think does a really nice job of giving us some targets that we can use in the future to help us tease apart some of these circuits,” Daniels said. “It actually raises more questions than it answers, which to me is the sign of an excellent study.”