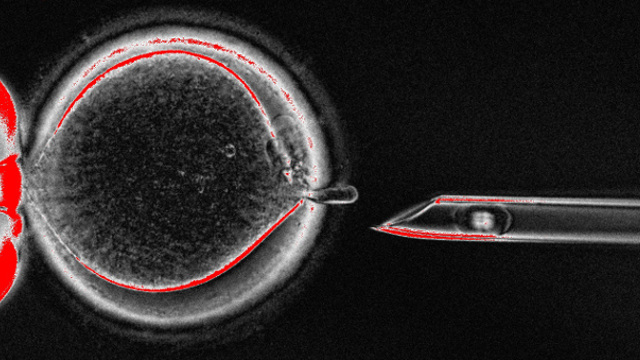 In efforts to prevent women who have pathogenic mitochondrial DNA (mtDNA) mutations from passing these on to their offspring, researchers have been developing so-called three-parent assisted reproductive techniques. All of techniques in development require an enucleated donor oocyte or a single-cell embryo with non-mutated mtDNA. In a study published today (November 30) in Nature, researchers from the Oregon Health & Science University and their colleagues demonstrate that nuclear DNA from human eggs harboring mutated mtDNA can be transferred to a healthy, nucleus-free donor egg and then successfully fertilized. The researchers also show that certain maternal mtDNA haplotypes may have a replicative advantage, underscoring the potential need to match the donor and carrier egg mtDNA haplotypes.

“This is interesting work that nicely demonstrates effective replacement of mutant mtDNA in oocytes by spindle transfer, the feasibility of...

Mitochondrial replacement therapy (MRT) has been performed in macaques, resulting in healthy offspring, and on human oocytes from donors, which—when fertilized—developed to the blastocyst stage. Both of these studies, led by Shoukhrat Mitalipov, a stem cell biologist at Oregon Health & Science University, were done using a meiotic spindle transfer technique in which nuclear DNA from the woman harboring the mtDNA mutations are transferred to an enucleated donor egg with wild-type mtDNA and subsequently fertilized. Another technique, recently shown by a U.K.-based team to have a relatively high efficiency of zygote survival, involves fertilization of the mutated mtDNA carrier oocyte and sperm and transfer of the early, pronuclei into a nucleus-free donor zygote containing healthy mtDNA.

For the present study, Mitalipov and an international team of colleagues used eggs from four women with a family history of mitochondrial disease and pathogenic mtDNA mutations. “We wanted to understand how effectively we could get eggs from a woman carrying mtDNA mutations, their quality, and how efficiently we could transfer the nuclear DNA into a donor egg with minimal mutant mtDNA carry-over,” Mitalipov told The Scientist.

Because the ratio of mutated to normal mtDNA varies from cell to cell, and because disease severity has been found to correlate with the number of mutated mtDNA copies, the team checked the abundance of mutated mtDNA in the carrier oocytes. The percentage of mutated mtDNA ranged from as low as 0.6 percent to as high as 96 percent depending on the woman and oocyte tested. The researchers transferred the meiotic spindles from the carrier oocytes to donor enucleated oocytes, fertilized the oocytes by sperm injection, and developed the fertilized eggs into 5-day-old blastocysts. Of the eight normally fertilized oocytes from the three women, six (75 percent) developed in blastocysts, similar to control fertilization using healthy donor oocytes with no mtDNA mutations, and similar to the rate of blastocyst formation in the control group of eggs derived from women with wild-type mtDNA.

As two prior reports have shown that some transfer of mutated mtDNA may be inevitable with both leading MRT techniques, Mitalipov and colleagues tested the ratios of donor-to-carrier mtDNA in the three-parent embryos. Of the 22 control and experimental embryos analyzed (including seven with mutated carrier mtDNA), all had more than 99 percent healthy, donor mtDNA. Of the 26 embryonic stem cell (ESC) lines generated, 22 of them contained more than 99 percent donor mtDNA. In four of the cell lines, the levels of maternal mtDNA increased as the cells were passaged, which finally resulted in complete loss of donor mtDNA. The team showed that this reversion to the maternal mtDNA haplotype also occurred in differentiated cells and, therefore, was not unique to ESCs.

Examining the ways in which cells could convert from a mix to a single mtDNA haplotype, the team uncovered that certain mtDNA haplotypes conferred a replicative advantage over others.

“This paper shows clear that, after MRT-like procedures, the mitochondrial genome composition can drift, which has also been observed in other research,” stem cell biologist Paul Knoepfler of University of California, Davis, who was also not involved in the study, wrote in an email.

“In one of the reversion cases, it was the maternal but non-mutated mtDNA that came back,” said Mitalipov. “But there is a possibility that the same could happen with mutated DNA, so we still need to understand how such a small fraction of mtDNA can take over an entire cell and embryo,” he added.

With several viable MRT options on the table, Hirano said he would like to know whether certain mtDNA haplotypes also replicate faster following pronuclear transfer.

“There are specific sequence polymorphisms that cause a variation within a replication control noncoding mtDNA region, which allows that haplotype to have a replicative advantage,” said Mitalipov. “If we were to match the donor and carrier eggs, that is the region that is likely to require matching, to avoid risking reversal to the maternal haplotype—similar to HLA immune system matching.”

To Knoepfler’s mind, matching the haplotypes of an egg donor and the mother-to-be are only partial solutions. “Further study is required to address the mechanism by which maternal mtDNA returns in abundance before MRT can be hoped to be a safe and predictable technology for use in reproduction,” he wrote.

Dieter Egli, whose own lab at the New York Stem Cell Foundation has shown that a small number of mutant mitochondria can multiply and take over a cell, agreed. “We need to understand how and why . . . this reversion happens and how can it be avoided,” he wrote in an email to The Scientist.

According to Mitalipov, the U.K.’s Human Fertilization and Embryology Authority will evaluate this new work to help the agency decide whether MRT can be used in the clinic.