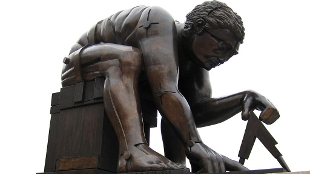 Eduardo Paolozzi's Newton, in the courtyard of the British Library in LondonWIKIMEDIA, SOLIPSISTRenowned microscopist Robert Hooke haughtily asks Isaac Newton if he’d ever had a play written about him when the two first meet in Lucas Hnath's new play Isaac's Eye. Set sometime during the plague year 1665–66, this meeting never actually happened, which is the case with a number of scenes in the play. Isaac’s Eye opens with a twentysomething Newton, confident of his genius, explaining his obsession with gaining entry into the Royal Society (founded in November 1660) of which Hooke was the Curator of Experiments. The young physicist is intent on explaining a cornucopia of his ideas to the most learned men in England. He wants to pierce them with his intelligence. After several rebuffs, Newton has forced the meeting by sending Hooke all of his work, leaving the curator worried about being...

What follows is a thoroughly engaging, thought-provoking, and often very funny exchange of ideas between two titans of science. Hnath plays Newton's decidedly odd, tortured personality off of the prickly Hooke, who was just 7 years Newton’s elder, but definitely more a man in and of the world. The two argue about things that still obsess practitioners of science to this day: experimental design, researcher bias, the importance of replicability, the value of thought experiments, credit for discovery—and they dis each other in earthy 21st-century language.

Throughout the play a narrator separates fact from fiction. True: Hooke was satirized in plays. False: This had already happened when he meets Newton in the play. True: the men were bitter scientific rivals. True: they both were interested in the nature of light—Newton believing light behaved as particles; Hooke, that it behaved as a wave. True: Newton probed underneath his own eyeball to see how it affected the perception of light and he did it sometime during the time in which the play is set. False: Hooke was there when he did. But Hooke himself was a master self-experimenter and would have been quick to embrace Newton's eye poking. True: Newton was invited to join the Royal Society, but not until 1671. In 1672 the Society published his treatise on the composition of white light, a full 10 years after Hooke's Micrographia was one of the first two books put out by the Society. And abundantly true: they pretty much hated each other.

While some may quibble when playwrights take artistic liberties with the lives of famous scientists or other historical figues, it works when the playgoer comes away with an appreciation not just of the scientist in his time, but the scientist in his mind. Consider the case made for this engaging and thought-provoking look into the mind (and through the eye) of Isaac Newton.

Isaac's Eye, which opened on February 9, is the mainstage production of the 15th annual EST/Sloan First Light Festival at the Ensemble Studio Theatre (EST) in New York City and runs through February 24. Other plays in various stages of development, as well as readings and workshops, will be presented through March 5. The Festival is an ongoing collaborative project between EST and the Alfred P. Sloan Foundation dedicated to the development of "credible and compelling" stage works that "challenge the existing stereotypes of scientists and engineers."