John O’Keefe, May-Britt Moser, and Edvard Moser won the 2014 Nobel Prize in Physiology or Medicine for their work identifying the cellular components and networks behind the mammalian brain’s so-called inner GPS. “This is a fascinating area of research,” Colin Lever, a senior lecturer in the department of psychology at Durham University in the U.K., who earned a PhD and continued postdoctoral research in O’Keefe’s lab, told The Scientist in October. “What we’re discovering about the brain through spatial mapping is likely of greater consequence than just for understanding about space. . . . Indeed, it seems to support autobiographical memory in humans.” 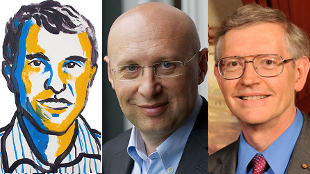 May 4: Alan Friedman, who renovated and reinvigorated the New York Hall of Science and pioneered interactive hands-on exhibits

May: Jean-Claude Bradley, the chemist known as the father of the Open Notebook Science movement

May 12: Melvin Glimcher, inventor of the prosthetic “Boston Arm,” which moves in response to electrical signals from the wearer

August 6: Stephen Heinemann, who along with his colleagues identified the genes encoding the major excitatory neurotransmitter receptors in the brain

October 24: Allison Doupe, a neuroscientist known for her work exploring the neural mechanisms of learning

October 26: Katrina Edwards, whose research focused on discovering life beneath the ocean floor