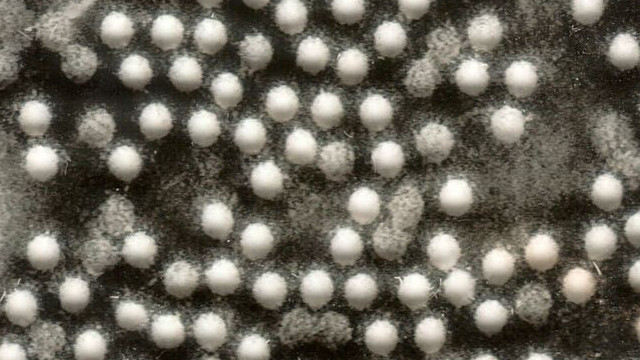 WIKIMEDIA, GRAHAM BEARDSPolio is nearly eradicated. But vaccine campaigns will continue in case, for example, some remaining infections go undetected. With the current technology, the need to continue vaccinations poses a challenge to a poliovirus-free world because “the only way you can make [vaccines] at the moment is using a live virus,” virologist Andrew Macadam at the U.K.’s National Institute for Biological Standards and Control, told The Scientist. The oral polio vaccine (OPV) contains live, attenuated virus; the inactivated polio vaccine (IPV) is made by growing, then killing, virulent virus. Both of these vaccines could cause outbreaks, through reversion of OPV to a virulent form or through leakage of live virus from an IPV production plant, Macadam explained.

To circumvent these problems, Macadam and colleagues are working to develop new vaccines that contain no virus at all. These consist of empty viral capsids, the viruses’ protein coats, called...

The study “opens up the possibility of not having to use virus to produce a virus-like particle which is noninfectious” said Olen Kew, the national poliovirus containment coordinator at the US Centers for Disease Control and Prevention, who was not involved in the research. “The facilities which handle by far the largest amounts of poliovirus are the vaccine producers,” Kew told The Scientist, “so if you can produce a vaccine without handling any virus at all, then that risk is eliminated.”

See “Toward Eliminating Poliovirus—In the Lab”

VLPs, which are already used in hepatitis B and human papilloma virus (HPV) vaccines, represent a potential solution. However, previous research indicated that poliovirus capsids were too unstable and temperature-sensitive to work as vaccines.

Using a combination of selection experiments and previous knowledge of stabilizing mutations, Macadam’s team identified mutations that render the viral capsids stable at higher temperatures. They then introduced these mutations into the poliovirus strains currently used to make IPVs, grew the viruses in cultured cells, and purified away the empty capsids. In addition to infectious particles, polioviruses produce empty shells during their life cycles.

To test efficacy, the team vaccinated mice transgenic for the human poliovirus receptor with VLPs they had created, then challenged the rodents with poliovirus. The mice vaccinated with VLPs had higher levels of neutralizing antibodies (which kill the virus) than those vaccinated with IPV, and all of the VLP-vaccinated animals survived the challenge.

Macadam led this study in collaboration with a multi-institutional consortium, funded by the World Health Organization (WHO), to develop VLPs. While the VLPs used in these experiments were produced using live poliovirus, Macadam’s collaborators are working to produce VLPs in recombinant systems, which would remove live poliovirus from the production process altogether. “There’s been very good progress already. We have VLPs that have been made in mammalian systems and in plant systems and have made some very good progress in the insect and yeast cells,” said Macadam.

The WHO’s Roland Sutter said he believes that VLPs could replace current polio vaccines, but there’s much work to be done. If successful, these could “make the world a much safer place,” he said.