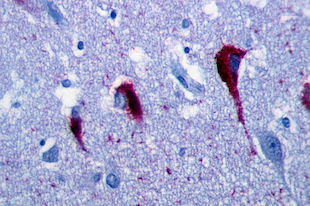 Neurofibrilliary tangles in the hippocampus of an aging person with Alzheimer’s pathologyWIKIMEDIA, PATHOThe tangled buildup of tau protein in brain cells is a hallmark of the cognitive decline linked with Alzheimer’s disease. Antibodies have been shown to block tau’s spread, but some scientists worry it could also fuel inflammation. Now, researchers from Genentech in San Francisco and colleagues have found that an antibody’s ability to recruit immune cells—known as its effector function—is not necessary for stopping tau’s spread, the team reported today (July 28) in Cell Reports.

“Our results suggest that, given that effector function is not required for efficacy [in treating tau accumulation], going without it could offer a safer approach for immunotherapy,” study coauthor Gai Ayalon of Genentech told The Scientist.

But recent efforts have zeroed in on tau as a new potential target. Antibodies are known to spur the brain’s defense system, microglia, to absorb and degrade tau, but their recruitment of immune cells may also worsen inflammation. Ayalon and colleagues wondered whether effector function was necessary for stopping tau’s spread.

His team found similar results when they cultured murine neurons with these antibodies. Both the full-effector and effector-less antibodies were effective in clearing tau from the cells. But when the researchers added microglia to the cultures, the full-effector antibodies prompted the microglia to take up tau and release inflammatory immune cells. Only the effector-less antibodies protected the neurons against tau-induced cell death. The findings suggest the antibodies could have an indirect effect on microglial activation, and may be unnecessary for therapeutic effect.

“It is excellent to see additional studies supporting the feasibility of tau immunotherapies,” neuroscientist Einar Sigurdsson of New York University School of Medicine, who was not involved in the study, wrote in an email to The Scientist. “Regarding the mechanisms involved, those will likely differ depending on the antibody and the model,” he added. “For example, it is well known that antibody uptake into cells in general can be quite variable depending on the antibody.”

The findings are likely to reignite an ongoing debate in the field over whether antibodies target tau inside or outside brain cells. A number of groups, including Sigurdsson’s, have found evidence of both pathways; these latest results favor the latter.

Tau immunotherapy may hold promise for a host of neurological diseases known as tauopathies, including chronic traumatic encephalopathy. “If this approach is successful,” said Ayalon, “the hope is it will be successful for additional diseases beyond Alzheimer’s.”

Update (July 28): This article has been updated to more completely cite the findings of previous research by Sigurdsson and others on antibodies that target tau.