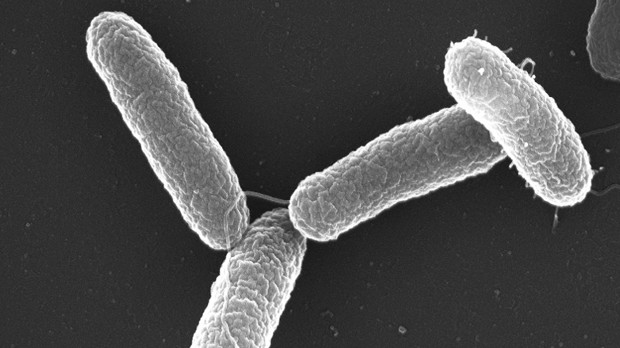 WIKIMEDIA, VOLKER BRINKMANNA genetically manipulated version of the gastroenteritis-causing bacteria Salmonella typhimurium is a potent destroyer of mouse tumors, according to a report published today (February 8) in Science Translational Medicine. The paper adds to a growing body of research investigating bacterial cancer treatments, and reveals an immunological mechanism that contributes to bacteria-driven, cancer–killing activity.

“I am super excited about applications for microbiota to eliminate cancer,” MIT’s Susan Erdman, who was not involved in the work, wrote in an email to The Scientist. “This work is part of a promising frontier in using bacteria or their products to stimulate beneficial host immune responses to inhibit and suppress cancer development and growth.”

The oxygen-starved and necrotic cores of tumors are attractive environments for anaerobic bacteria such as Salmonella, Clostridium, and Listeria, and an infection can lead to tumor colonization by these bugs. As the bacteria busily multiply,...

While this is the reasoning behind most bacterial cancer therapies, treating patients with this approach isn’t straightforward. There are safety issues, explained Saurabh Saha, president and chief executive officer of the San Francisco–based biotechnology company Delinia, who was not involved in the work. For example, said Saha, recounting a recent experimental Clostridium treatment, although the patient’s tumor was dramatically diminished by a single dose of the bacteria, the effect “was so potent that the patient needed to get hydration, needed antibiotics—because we needed to contain the reaction.”

On the other hand, in a recent trial, in which researchers injected attenuated Salmonella into patients, the bacteria “were shown to be safe, but . . . they weren’t as effective at creating a strong response,” Saha said, adding: “We have a long way to go to get to some happy medium.”

To improve the chances of developing a successful bacterial treatment for cancer, Jung-Joon Min of the Chonnam National University in Korea and colleagues are trying to first perfect the approach in mice. The team had previously shown that an attenuated Salmonella strain could colonize tumors and activate immunity in mice, but it was “not perfect” at killing cancers, Min wrote in an email to The Scientist, “because 70-80 percent of [the] cancers recur.”

To boost the potency of the Salmonella, Min’s team engineered the bacteria to overexpress a protein proven to induce a strong immune response—flagellin B (a component of the tail-like swimming appendage of some bacteria).

Intravenous injections of the flagellin-expressing Salmonella eradicated the experimental tumors in 55 percent of mice, which then remained healthy until the end of the four-month observation period, the researchers reported. Without overexpression of flagellin, the Salmonella initially shrank tumors in the mice, but the tumors tended to regrow.

The researchers observed that, following Salmonella colonization of the animals’ tumors, local macrophages—cells of the innate immune system—switched from an immunosuppressive to a pro-inflammatory phenotype. Furthermore, genetic knock-out experiments revealed that Toll-like receptor 4 (TLR4)—a host protein that stimulates the innate immune response—was essential for the Salmonella-induced anti-cancer activity.

One of the problems with developing bacterial cancer treatments, said Saha, has been that “these bacteria are almost a black box.” They promote cancer destruction, but no one is exactly sure how. The present study “extends our understanding of bacterial-based cancer therapy at a molecular level,” he said.

Although there has been a recent flurry of investigations into the use of bacteria as cancer-killing agents, it is actually the second wave for such research, said Robert Hoffman, president and chief executive officer of Anticancer, a San Diego–based preclinical contract research organization.

In the late 1800s, bone surgeon William Coley pioneered the use of bacteria as a cancer treatment after discovering that a cancer patient who suffered a bacterial infection survived longer than expected. Back then, before radiation and chemotherapies prevailed, bacteria injection “was a first line therapy,” said Hoffman.