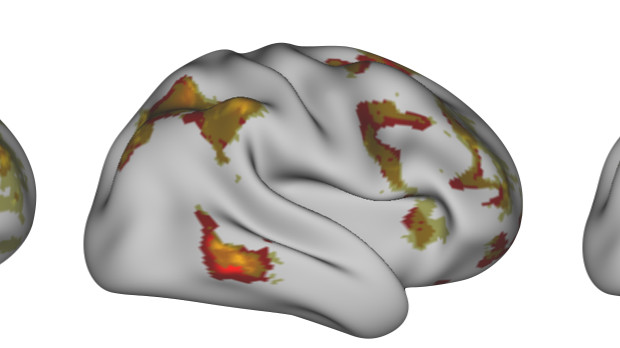 Illustration of an individual performing a language task: predicted activity (yellow), recorded activity (red)UNIVERSITY OF OXFORD; IDO TAVOR, SAAD JBABDIEach of us has a unique neural connectome, a network within and between different brain regions that is preserved both at rest and during a range of activities. Now, scientists from the University of Oxford, U.K., and their colleagues have shown that this map of the brain’s activity at rest provides information on what that brain looks like when performing a task. The team’s results were published today (April 7) in Science.

“We show that we can essentially predict how people will use their brains based on [their resting brain activities],” said study coauthor Saad Jbabdi of Oxford.

Individual brains differ in shape, architecture, and connectomes, impacting how different parts of the brain communicate. A long-standing question in neurobiology is to what extent brain architecture and/or neural connections underlie behavioral differences observed among people.

Integrating the various neuroimaging data types, the team built a model that accurately predicted individual brain responses to 46 of the 47 tasks assessed. (Because the model focused on cortical activity, it was less able to predict a person’s brain activity when performing a gambling task, which involves subcortical brain regions, explained study coauthor Ido Tavor, a postdoctoral fellow in Jbabdi’s lab.)

The Oxford team is not the first to apply such an approach. After showing that a person’s brain connectivity could be used to predict neuronal activation in his or her brain during a given activity, a group at MIT last year showed in Cerebral Cortex that measuring structural neuronal connectivity using diffusion-weighted MRI could help researchers predict fMRI responses to four different types of visual stimuli in 26 people. Both the Oxford and MIT groups used similar modeling approaches to predict task-specific brain activity from structural and connectivity data.

“It is a longstanding idea that connectivity and function in the brain go together,” explained Nancy Kanwisher, a professor of cognitive neuroscience at MIT and a coauthor on the 2015 Cerebral Cortex study who was not involved in the work of Jbabdi and colleagues. “But it is only recently that the work of Zeynep Saygin and [that presented in] this new Science paper have shown this tight link between connectivity and function all over the brain.”

Jbabdi said he and his colleagues were not aware of Kanwisher and colleagues’ 2015 study and therefore failed to cite it. He has since contacted Science, requesting to add the citation, he told The Scientist.

“The Science paper extends the [prior publication] in important ways,” said Michael Cole, a neuroscientist at Rutgers University in New Jersey. “There are many more tasks included [in this latest study], and that is not trivial because the regions in the brain where more-complicated cognitive tasks are processed are not well understood.”

The results of both studies suggest it may be possible to use an easy-to-generate image of an individual’s resting brain to infer how parts of the brain function in people who cannot perform certain tasks. “­The ability to predict cognitive task activity in individuals could be really important in clinical applications,” said Cole.

Jbabdi’s group is now testing whether its model can be extended from healthy individuals to those with certain disorders known to affect brain function. “Our brains have elaborate networks,” said Jbabdi. “We can now learn what these networks are for every individual.”