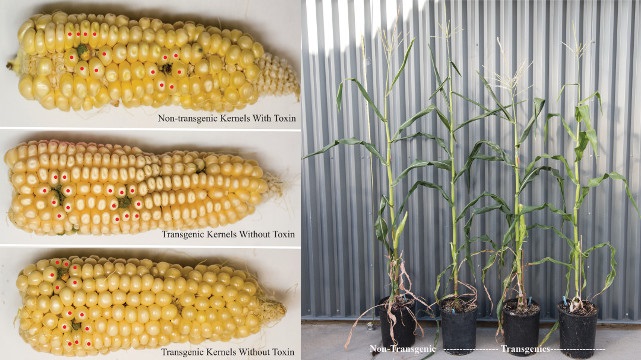 Aspergillus molds make some 16 million tons of corn unsafe for consumption each year. It’s not the fungus itself that’s the problem, however; it’s the fungal metabolites, called aflatoxins, which can negatively affect the health of animals and people who eat infected crops.

In a step toward aflatoxin-free maize, scientists at the University of Arizona have developed an RNA interference (RNAi) cassette that targets three regions in the fungal gene aflC, which encodes an enzyme required for aflatoxin production. When transfected into maize, the RNAi cassette reduced aflC expression in A. flavus–infected corn kernels, reducing fungal aflatoxin production. The team described the results of its host-induced gene silencing approach in Science Advances today (March 10).

While several planting, harvesting, and storage methods and the application of fungicides can reduce fungal...

Monica Schmidt, an assistant professor of plant sciences at the University of Arizona, was initially interested in reducing aflatoxin in peanuts, but “the biggest crop, globally, that has an [aflatoxin] problem is corn,” said Schmidt. Focusing on suppressing aflatoxin production at the point of infection in corn, Schmidt and colleagues designed an RNAi cassette that targets three regions in aflC. The alfC-encoded polyketide synthase is required early on in aflatoxin synthesis. The idea was that, by targeting three sections of the fungal transcript behind this enzyme, the team might fully silence the 7-kilobase gene. “We didn’t want to target one area [so the gene] would [be] a little truncated and not working at great enzymatic activity, but still working,” Schmidt explained. “We wanted to make certain that the transcript was gone.”

Targeting three regions of a gene “increases your chance of being successful,” said Zhi-Yuan Chen, who studies maize-A. flavus interactions in at Louisiana State University and was not involved in the work.

The researchers inserted the RNAi cassette into developing maize kernels, then propagated the plants to develop three homozygous lines. The resulting specimens exhibited typical growth and development, and the team did not detect any aflatoxin in RNAi-expressing corn kernels from each of the three transgenic plant lines. But their detection method was limited to around 93 parts per billion (ppb)—more than four times the 20 ppb aflatoxin limit the US Food and Drug Administration deems safe for use in animal feed.

“When you don’t detect aflatoxin, it’s not [necessarily] ‘aflatoxin-free,’” said Chen, citing the reported limit of detection. “It’s not so simple.”

Other groups have attempted similar host-induced gene silencing methods to suppress aflatoxin production by targeting a number of different Aspergillus genes. “One advantage is you get to pick the gene you target, so if it’s a pretty essential gene . . . the effect could potentially be durable,” said Scot Howard Hulbert, a professor of plant pathology at Washington State University who was not involved in the work. “This RNAi way looks like it’s working.”

Suppressing aflatoxin production solves only one of the problems associated with Aspergillus. It won’t protect crops from fungal rot, which can affect yield, so researchers continue to work toward reducing Aspergillus infection in corn and other plants. “To really control this issue, you need to use multiple approaches,” said Chen. Host-induced gene silencing “does have the potential to [be a] very efficient [aflatoxin] management approach besides biocontrol,” he added.

Schmidt said her team would like to use its approach to target other crop-destroying toxins. “This little fungus is really getting the best of us,” she told The Scientist. “We should be able to put our minds together and stop this and free up a lot of edible food crops.”