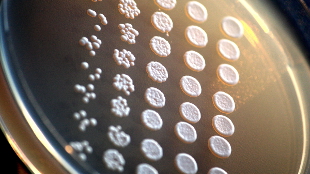 WIKIMEDIA, RAINIS VENTAIn 2008, a team led by Stanford University’s Christina Smolke, then at Caltech, showed in Nature Chemical Biology that engineered yeast (Saccharomyces cerevisiae) could produce benzylisoquinoline alkaloid (BIA) metabolites, including the alkaloids from which morphine is derived. Now, in a paper published today (August 24) in the same journal, Smolke’s team shows that S. cerevisiae engineering to express additional enzymes can be coaxed to synthesize naturally occurring opiates and semisynthetic opioids from BIA precursor molecules. The results represent a step toward engineered yeast–based biomanufacturing of morphine.

“The authors have demonstrated that it is possible to develop a technology platform in yeast that allows the transformation of [the opiate alkaloid] thebaine to a variety of opiate drugs by mixing and matching microbial and plant enzymes,” biochemist Neil Bruce from the University of York, U.K., told The Scientist in an e-mail. “This is elegant piece of...

Smolke and her colleagues have been working to reconstruct this pharmaceutically relevant pathway in yeast for nearly a decade. “When we started this project about 10 years ago, we were interested in plant natural product pathways [and] developing new ways to source these compounds because plants are very difficult to engineer,” said Smolke. Around that time, “a lot of genome sequence information was coming out, [along with] advanced informatics and synthetic biology tools, so we could really go in and start to look at reconstructing these complex pathways in yeast.”

Altogether, the morphinan biosynthetic pathway involves more than a dozen steps and even more enzymes, so reconstructing it in an organism that doesn’t normally produce such metabolites has proven difficult. And when introducing genes from the Opium poppy (Papaver Somniferum) and the bacterium Pseudomonas putida into the yeast genome, the team encountered an array of engineering challenges. “Getting sufficient activity from those enzymes has been a challenge because every step [of the biosynthetic pathway] is not 100 percent efficient,” said Smolke.

Moreover, expressing these enzymes out of their native context opens up the possibility of promiscuous enzymatic activity and unintended byproducts, she added. Indeed, in an early iteration, the researchers found that more than half of their product was diverted away from morphine, instead yielding related molecules neopine and neomorphine.

To circumvent these issues, the researchers devised a strategy to localize and delocalize enzymes within the yeast cells to improve the reaction specificity and, therefore, efficiency. “A particularly elegant aspect of the work is the compartmentalization of one of the enzymes in the endoplasmic reticulum to improve product yields and preventing side reactions,” wrote Bruce.

The team’s optimized approach was capable of yielding up to 131 miligram of opioid products per liter—a far cry from the titer required for commercial production, but far higher concentration than produced in an engineered microorganism to date.

“I applaud them; they should really keep working on this,” said Toni Kutchan, vice president for research at the Donald Danforth Plant Science Center in St. Louis, Missouri. But, she added, the researchers must still piece together the portions of the pathway they’ve reconstructed in yeast to date.

“This is a long pathway when you string the whole thing together,” agreed Smolke, adding that there’s more work to be done toward that end. But she has reason to believe an engineered yeast–based approach to morphine production is amenable to industrial scale-up, and suggested that microbial production offers several benefits over agricultural cultivation and processing—chief among them, unlike poppy farming, yeast fermentation doesn’t exhibit the same vulnerabilities to climate change or affect its surrounding environment, making them a green alternative to poppy farming.

“With microbial fermentation technology,” she said, “there really is an opportunity here to develop a more efficient manufacturing platform, but also one that is more stable, reliable, and easier to secure.”