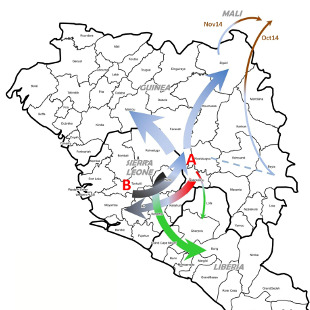 Map showing spread of Ebola based on phylogenetic analysis of lineage A from March 2014 and B starting in May/June 2014PUBLIC HEALTH ENGLAND; MILES CARROLL, MICHAEL ELMORE (WITH PERMISSION FROM NATURE PUBLISHING GROUP)

The ongoing Ebola outbreak is the largest on record. The World Health Organization (WHO) this week (June 17) reported 27,305 confirmed cases, including 11,169 deaths. In an effort to better understand the deadly virus, scientists have mapped the transmission and evolution of Ebola at the epicenter of the 2014 epidemic (Guinea, Liberia, and Sierra Leone), providing a detailed look at the virus throughout the first nine months of the outbreak. Together with previously published Ebola sequencing analyses, the results of two independent studies published this week could help health officials better prepare for and control future outbreaks.

In a study published in Nature this week (June 17), Miles Carroll of Public Health England and his colleagues...

Epidemiologist Stephen Morse of Columbia University in New York told The Scientist in an e-mail that the molecular data and associated geographic and temporal information presented in these studies could be a boon for researchers. The information might be used to understand which virus variants are most successful in which circumstances, added Morse, who was not involved in the work.

Overall, said Carroll, “these studies show the virus is not mutating like mad and does not appear to be adapting to a novel phenotype.”

Both teams sequenced the patient-derived viruses and performed phylogenetic analyses, finding that the pathogen spread by direct human-to-human transmission without any apparent animal intermediates. Traditional epidemiology and infection control have helped health officials bring the epidemic under control, said Paul Kellam, virus genomics team leader at the Wellcome Trust Sanger Institute in the UK who was also not involved in either study. “Molecular epidemiology,” he noted, “brings us an extra facet to . . . define the course of transmissions.”

The genomic analyses confirm that initial interventions put in place in spring 2014 by the WHO, the Guinean government, and other agencies “narrowly contained the outbreak,” said Carroll. Later, a single individual appeared to have carried the virus to Sierra Leone, after which the pathogen made its way back up to Guinea and Liberia, “causing a bigger wave of infections three months later,” Carroll explained. The viruses from Guinea and Sierra Leone mixed during summer 2014. Both studies showed little evidence of cross-country migration by early fall 2014. “The borders are not nearly as porous as previously thought,” said Park.

The analyses show that the initially rapid rate of viral evolution tapered off as the epidemic continued, confirming the results of a March 2015 study analyzing an initial Sierra Leone patient sample set from May to June 2014, and resembling the longer term genomic evolution observed for other types of viral outbreaks. “The virus does not seem to be adapting to the host . . . even though it had a bigger opportunity as the outbreak was a lot bigger than past outbreaks,” Carroll told The Scientist.

Still, the focus on the viral mutation rate in the literature “has been an unhelpful distraction from the epidemiology,” Oliver Pybus, a professor of evolution and infectious disease at the University of Oxford who was not involved in the work, told The Scientist in an e-mail. “The fluctuations in the ‘apparent’ rate have more to do with statistical interpretation than biological importance.”

Park agreed. “The evolutionary rate is similar to that of other RNA viruses and not the most interesting result.”

Scientists are now calling for faster, on-the-ground sequencing and quicker analyses that can be used during an epidemic rather than retrospectively. “For Ebola, we need this information within two to four weeks,” said Kellam. “Right now, there is a disconnect between the traditional scientific process and what needs to be done during the outbreak.”

“The field needs to get together and agree on genomic [data-]sharing principles,” agreed Pybus. “Information that can guide public health interventions will be lost if the data is reported piecemeal or with significant delays.”

In the meantime, researchers are pooling available genomic data sets to provide an up-to-date molecular picture of the outbreak. “This is the future,” said Kellam. “If we can do this with Ebola, we can this for any other epidemic infection.”