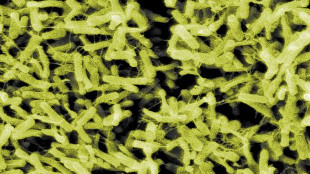 The study “adds a puzzle piece to the overall picture of the importance of the stool microbiome in health as well as disease,” David Suskind from Seattle Children’s Hospital and the University of Washington School of Medicine, who was not involved in the work, told The Scientist in an e-mail. “This study also confirms the restorative powers of fecal transplant on microbial diversity and its positive effects on clinical outcomes.”

Researchers from the University of Maryland School of Medicine’s Institute for Genome Sciences and Sinai Hospital in Baltimore used 16S rRNA gene amplicon pyrosequencing to...

Through this analysis, the team both confirmed that RCDI is associated with reduced diversity and compositional changes in the fecal microbiota and evaluated post-FMT microbiota dynamics. “When we compare sick patients and healthy individuals’ microbiota composition, we see that there is not just higher diversity, but also a lot of intra-individual variation in the rare members between healthy individuals, and it seems to be exactly that fraction [of diversity] that is lost in the sick patients,” Fricke said. “So [sick patients] kind of get reduced to a more common core of shared species, and the rest is filled up by a few, very dominant ‘bad bacteria’”—such as Streptococci and Gram-negative Enterobacteria or Enteroccoci—he added.

FMT swiftly remedied all 14 patients’ C. diff symptoms—within two to three days—and led to an eventual redistribution of the microbial composition to resemble healthier diversity. Specifically, the team pinpointed certain microbes that were generally reduced in RCDI patients but partially restored five or more months after FMT. But given their sample size, the researchers could not pinpoint any bacterial groups that were significantly associated with RCDI or successful FMT treatment.

RCDI patients have “significant reduction in [stool microbe] diversity compared with healthy individuals,” said study coauthor Florian Fricke, an assistant professor of microbiology and immunology at Maryland. “After successful [FMT] treatment, the diversity increases and we see a trend that they don’t quite reach the diversity of healthy individuals, although we would need more cases to statistically confirm that.”

Moreover, it’s unclear exactly how the introduction of donor microbes affects the composition in RCDI patients’ guts. “We cure the patient, but we don’t know what’s happening,” said Josbert Keller, a gastroenterologist at Hagaziekenhuis Hospital in The Netherlands, who was not involved in the work. “It’s a completely unstandardized treatment. . . . We need to understand the mechanism of action of donor feces to see what changes and, ideally, we should understand what changes are really needed to cure the patient.”

Indeed, among several unresolved questions is which donor strains are responsible for the experimental treatment’s success. And scientists caution that transplanted stool microbes could have unintended effects later in the recipient’s life.

“I’m not necessarily a wholesale proponent of this [FMT] because we are blaming microbiota for a lot of diseases,” said Vincent Young, an associate professor of microbiology and immunology at the University of Michigan, who was not involved in the work. “We’re making them better from the point of view of recurrent Clostridium difficile infections, but are we also potentially setting them up for something more if we’re not careful?”

Fricke and his colleagues plan to continue following the patient-donor pairs in hopes of addressing some of these longer-term questions.

But while there are many unknowns, experts agree that FMT can be a life-saving option for RCDI patients who have run out of treatment options. “Over time, FMT will be more accepted as standard practice,” said Suskind. “The challenges are not truly challenges, but more opportunities to better study and further the science of the stool microbiome.”