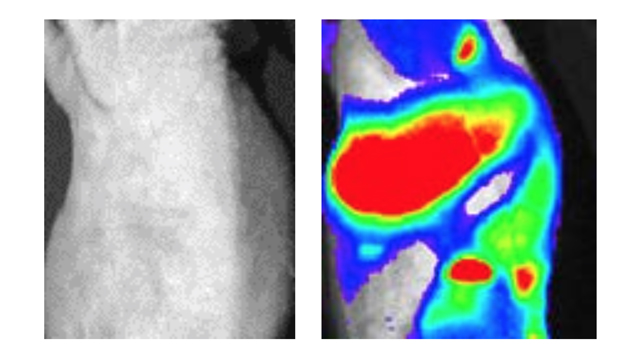 Melanoma metastasis in vivo, visualized using MetAlert mice. The image on the right is an animal that emits bioluminescence upon the induction of new lymphatic vessels, an early stage in the development of metastasis. On the left is an equivalent animal with non-aggressive melanoma.MARISOL SOENGAS/CNIOMetastasizing cancer cells travel through the lymphatic vasculature, but it’s not clear what role the formation of lymph vessels, called lymphangiogenesis, plays in cancer progression. Now, an international team of researchers has used a new mouse model to link lymphangiogenesis to melanoma metastasis. Bioluminescent cells in the animals not only showed where tumors were spreading, but after tumor removal could indicate that cancer recurrence was imminent. Their findings were published today (June 28) in Nature.

“The question is, how do cancer cells get to the visceral metastasis sites, [such as] lung and liver?” Harvard University cancer biologist Rakesh Jain, who did...

Marisol Soengas, who leads the melanoma group at the Spanish National Cancer Research Centre in Madrid, wanted to investigate the early stages of metastasis in cutaneous melanoma, an especially aggressive form of cancer. “When the metastases occur, they are not just a single metastasis,” Soengas says. Instead, “the cells tend to disseminate to different organs in the body and develop what we call multiple metastases. That’s a complication in trying to visualize the process because usually you need a number of cells for a micrometastasis to be detected.”

In order to overcome this challenge, Soengas and colleagues decided to track the induction of lymphatic vessel formation—a process known to be activated by melanoma cells. They engineered mice that couple the production of the bioluminescent molecule luciferase to the expression of the vascular endothelial growth factor receptor 3 gene, which is active in developing lymph vessel cells. “At the moment when and where these new vessels have formed, these animals emit light,” says Soengas. 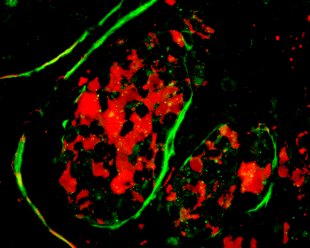 Melanoma cells (red) within lymphatic vessels (green) in a lung metastasis MARISOL SOENGAS/CNIOThe group generated several strains of reporter mice, including one into which they could transplant human melanoma cell lines or human tumor samples and others that developed melanoma due to disrupted tumor suppressors and oncogenes. The researchers visualized the mice and observed varying degrees of lymphangiogenesis. They were surprised to see that lymphatic vessels formed in distant lymph nodes and in the lungs, spleens, and livers of the mice, not just at sites near the primary tumors.

When the authors surgically removed the tumors, as clinicians would in human patients, they saw a decrease in lymphangiogenesis, as indicated by a drop in luciferase activity. Luminescence gradually returned after surgery, and shortly after, the tumors also reappeared, which suggests that lymph vessel formation indicates pre-metastatic sites in the mice.

Soengas explains that the power of the system is the ability to non-invasively assess metastatic progress at multiple time points “without the need for injectable probes, without having to do surgery to see that the tumor cells are there. Compared with other techniques like PET and CT scans, ours is much more sensitive because we detect how the tumor prepares the sites before they are actually colonized.”

The team next compared secreted factors from highly metastatic and less aggressive cell lines and tumors. One differentially produced molecule they identified was midkine, a heparin-binding protein that was previously implicated in metastasis in other tumor types. When the authors knocked down the gene for midkine in mice, they saw lower levels of lymphangiogenesis and metastasis. Overexpression of the midkine gene led to high levels of both lymphatic vessel growth and metastases in mouse lymph nodes and lungs. And in human melanoma patients, high midkine levels correlated with greater numbers of metastases and lower survival rates after 10 years.

This study is “an important step in trying to understand the influence of the lymphatic network on metastasis,” says Steven Stacker, a tumor angiogenesis researcher at the Peter MacCallum Cancer Centre in Victoria, Australia, who did not participate in the work. “The model they’ve created provides a powerful platform where other pathways and molecules can be investigated and other discoveries made.”

“The mouse model they have developed is going to be widely used,” Jain agrees. “There are many applications. The most obvious one is to repeat these studies in other tumor types. Is this generalizable? Does it go beyond melanoma?”

“The activation of the lymphatic vasculature happens in a broad spectrum of solid tumors,” says Soengas. “In principle, we could implant any tumor type.”

Another open question is, “how distant lymphangiogenesis contributes to metastatic colonization,” Mihaela Skobe, a cancer biologist at Icahn School of Medicine at Mount Sinai in New York City who did not participate in the work, writes in an email to The Scientist. “At this point there is a strong association, but it is not clear how distant lymphangiogenesis preceding metastasis could promote spread” of cancer cells.

Soengas and colleagues are already using what they’ve termed the MetAlert mice to find more effective pharmacological treatments. “We have tested compounds that have been approved for the clinic,” as well as more experimental drugs, she says. We want “to find better combinations and also other mechanisms of action that involve the lymphatic vasculature.”