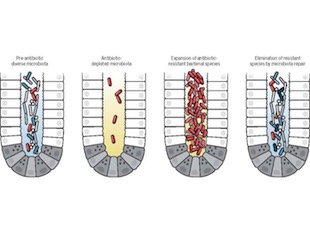 Antibiotic treatment eliminates many commensal bacterial species from the gut lumen, but fecal transplants can restore a healthy microbial community.SCIENCE, E. PAMER ET AL.New research casts some light on what happens to a patient’s gut microbiome after a fecal microbiota transplant (FMT). Researchers at the European Molecular Biology Laboratory (EMBL) in Heidelberg, Germany, and their colleagues sequenced the DNA of bacterial strains in patients with metabolic syndrome who each received an FMT, finding that donor strains persisted in the recipients’ guts for up to three months following the procedure. In their paper, published today (April 28) in Science, the researchers also examined FMT donor-recipient compatibility.

“It was a well-done study,” Vincent Young, a professor of internal medicine at the University of Michigan who was not involved in the work, told The Scientist. Previous studies have shown that certain species of donor bacteria persist...

FMTs, in which stool microbes from a healthy donor are transplanted into a recipient, have been shown to be a successful treatment for recurrent Clostridium difficile infection, and are being investigated for a number of other gastrointestinal disorders. But the procedure is usually preceded by an antibiotic blitz, which wipes out any existing microbial communities in the recipient’s gut, making it difficult to assess a patient’s microbiome before and after FMT.

To find out, study coauthor Peer Bork, head of structural and computational biology at the EMBL, and colleagues sequenced single-nucleotide variants of bacterial strains in fecal samples from a previous study of 10 patients with metabolic syndrome (who had not recently been treated with antibiotics), half of whom underwent FMT from a healthy donor and half of whom had a placebo procedure. The researchers sequenced strains from the patients’ stool five times over nearly three months—once before the transplant and four times after the procedure.

In all but one of the patients, the donor strains were still present nearly three months after the transplants—replacing, or in some cases, coexisting alongside pre-existing strains, the team found.

“With strain resolution, you can really see whether donor strains make it or not,” Bork told The Scientist—meaning, “for the first time, you can study the population genetics or ecology of the bacteria,” he said.

Bork also noted that new strains of bacteria transferred more easily than new species. “This makes sense, because the immune system recognizes [the new strains], whereas a new species is seen as foreign and easily rejected,” he said.

Three of the patients who had FMTs from the same donor all showed different responses, suggesting a universal fecal “super donor” does not exist, Bork said. Rather, the success of the transplant appears to depend on the compatibility between the donor and the recipient.

“A ‘one-stool-fits-all’ model, currently supported by standardized donor stool banks, may not be clinically appropriate,” the researchers wrote in their paper. Ultimately, “we want to get away from stool transplantation [and move toward] a cocktail of relevant bugs optimized for a particular person,” Bork told The Scientist.

“The most interesting finding is that when particular microbes were present in the recipient, the engraftment of donor microbes was facilitated,” Martin Blaser of New York University Langone Medical Center, who was not involved in the study, told The Scientist. “The findings could help inform future FMTs in terms of ecological considerations, selection of donors, or matching of donors and recipients.”

The present study did not investigate clinical efficacy of FMT for metabolic syndrome. For that, Bork said, a larger cohort would be needed.