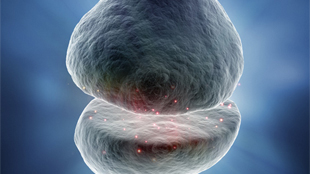 LIFE MENTAL HEALTH Researchers at the Mount Sinai School of Medicine in New York have reversed depression-like behaviors in mice in an unexpected way. Rather than silencing the hyperactive neurons that triggered the rodents’ symptoms, the team boosted their activity even further. This triggered a compensatory, self-tuning response that brought the neurons’ firing—and the rodents’ behaviors—back to normal.

“There’s a saying in Chinese: If you push something to an extreme, the only way it can go is in the opposite direction,” said Ming-Hu Han, who led the study, published today (April 17) in Science. Although his team needs to confirm their results in humans, Han added, “it could give us new avenues for treating depression that are conceptually very different to the classical therapeutic strategy.” Rather than identifying the cause of an illness and reversing it, it may be possible to push those causes even harder and get...

The team subjected mice to 10 days of constant stress by housing them in cages with a dominant-aggressive rival. Under these circumstances, some susceptible mice developed symptoms similar to depression—avoiding social contact, losing motivation, and gaining less pleasure from rewarding activities like tasting a sugary drink. Other, more resilient, mice showed no such symptoms.

In earlier studies, the team showed that these differences depend on a brain region called the ventral tegmental area (VTA), which is a hub for dopamine-producing neurons. If these neurons are too active, the mice are more likely to show signs of depression. And the team managed to convert resilient rodents into susceptible ones by stimulating the VTA’s dopamine neurons, and vice versa, by silencing them.

They also found that the VTA dopamine neurons in susceptible mice have an unusually strong Ih current—a stream of positively charged ions that flows into them after they fire and restores them to a resting state. These cells reset more quickly, and fire more frequently.

But when postdoc Allyson Friedman measured the Ih currents in resilient mice, she found a surprise: they were even larger than those in susceptible rodents. This should have driven the rodents’ VTA neurons into fits of runaway activity but, in fact, those neurons were firing normally. As Friedman discovered, they also had a stronger inhibitory current, which cancels out the excitatory Ih one. These currents balance each other out to make the dopamine neurons resistant to perturbations, and the mice resilient to stress.

The team wondered whether they could duplicate the same balance in susceptible mice by exaggerating their Ih currents rather than dampening them. “The idea looks crazy, right?” said Han. “We hesitated to go down that direction. What if we made things even worse?”

They team made the VTA neurons more active in three ways: they boosted their Ih currents with a drug called lamotrigine; they added extra copies of the HCN2 proteins that drive the Ih currents; and they stimulated the dopamine neurons directly by loading them with light-sensitive proteins and flashing them via optic fibers.

In all three cases, the treatments reversed the depressive symptoms of the susceptible mice after five days. The animals became more sociable and regained their sweet tooth. Their once-hyperactive VTA neurons became less excitable thanks to stronger inhibitory and excitatory currents, and started firing normally.

Han’s team has effectively discovered the neurological version of a psychological phenomenon—resilience. “It makes us re-evaluate what it means to be resilient,” said Michelle Mazei-Robison from Michigan State University, who was not involved in the work. “We didn’t think of it as a continuum, where you almost have to push through the pathological response to bring things back into balance, rather than just having some sort of compensation. It’s a new twist, and very novel.”

The mechanism is conceptually similar to exposure therapies in which people with anxiety are deliberately and safely exposed to the objects or situations that worry them. However, Han cautioned that it would be foolhardy to try a similar strategy for people with depression. “They have a higher risk of suicide,” he said. “You wouldn’t want to make them even more depressed to try and get a treatment effect.”

Instead, he hopes that by studying the resilience effect more carefully, he can find safer and more efficient ways of triggering it in people.  “Perhaps for people with depression, we can tap into their own homeostatic ability that’s hopefully there but that they aren’t reaching for whatever reason,” Mazei-Robinson added.

“It’s an exciting breakthrough with vast translational potential,” said Kay Tye from MIT in an e-mail. “Pushing the system one way could actually trigger the brain’s own homeostatic plasticity to push back. This could be a critical factor in the functionality of existing therapies, as well.” For example, lamotrigine is sometimes used to treat people with bipolar disorder who go through bouts of depression. “We never knew how it worked, but our study gives us an idea,” said Han.

The team still must address several issues. For example, not all of the VTA’s dopamine neurons are the same. The team found that they could only induce resilience by overstimulating the neurons that connect the VTA with the nucleus accumbens (NAc), rather than those that link to the medial prefrontal cortex (mPFC).

The VTA also responds differently to different types of stress. In 2012, Han’s team managed to reverse depressive symptoms in socially-stressed mice by silencing their VTA neurons. But Tye’s group at MIT found that the same technique had the opposite effect in mice that experienced chronic, long-term stress. In these rodents, silencing the VTA induced depressive symptoms in normal mice.

“The VTA dopamine neurons have clear contextual dependence, and we don’t understand that,” said Han. “That’s a big issue in the field now.”