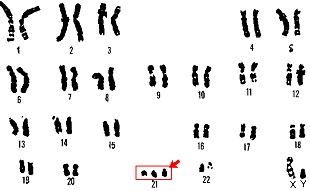 U.S. DOE, HUMAN GENOME PROJECTThe deleterious effects of trisomy 21—the extra chromosome behind Down’s syndrome—can be seen across the entire genome, according to a study published today (April 16) in Nature. While studying a pair of monozygotic twins in which only one person had Down’s syndrome, a team led by Stylianos Antonarakis of the University of Geneva Medical School in Switzerland discovered that trisomy 21 can affect other chromosomes.

This rare twin pair allowed the researchers to compare the effects of Down’s syndrome on gene expression in two otherwise genetically identical individuals. The researchers found that in the twin with Down’s syndrome, genes in territories along the chromosomes that are highly expressed in people without the disorder showed reduced expression, while genes in territories that are normally suppressed were more highly expressed.

“The fact that they’ve got these really nice domain structures genome-wide further implicates the rising perception of the Down’s syndrome response as being more of a systems-level response, rather than . . . just the simplified perspective that we’ve had for a long time”—that the extra chromosome 21 is alone responsible for the symptoms of Down’s syndrome, said Robin Dowell of the University of Colorado at Boulder, who was not involved in the work.

The Swiss team examined messenger RNA (mRNA) sequences in skin fibroblasts from both twins. The researchers found 182 genes that varied in expression levels between the individuals, including some that code for proteins. They dubbed the problematic gene regulation territories “gene expression dysfunction domains,” or GEDDs, and suggested that these GEDDs interfere with a cell’s ability to regulate transcription, possibly by contributing extra copies of genes that are involved in gene regulation. And they found similar domains when they studied Down’s syndrome mouse models. Cells from the human twins converted to induced pluripotent stem cells (iPSCs) retained the GEDDs.

When the researchers studied GEDDs in non-related individuals, they found that the variation of gene expression among unrelated individuals was strong enough to mask the dysregulation effect, which could be one reason why this effect was not identified sooner. “I don’t think . . . the Down’s syndrome community [and] the transcription community really understood the extent of this individual variation problem,” said Dowell. “I think this paper makes it very clear.”

“The mere addition of a small piece of DNA—about 30 megabases, or 1 percent of the genome—can disturb the entire transcriptome, all the genes of the genome. And not only disturb them, but disturb them in a specific and programmed way,” said Antonarakis. He noted that such disturbance of gene regulation could be common among other chromosome abnormalities, including other trisomy-related disorders and, possibly, cancer.

Antonarakis and his colleagues investigated changes in DNA methylation as a possible cause of GEDDs, but found no significant differences in the levels of cytosine methylation between the cells from either twin. The researchers did correlate these dysfunction domains with previously identified lamina-associated domains—those linked to the filamentous lamina that line the inner nuclear membrane.

The next step, according to Ahmad Salehi of Stanford University, who was not involved in the study, is to uncover the mechanism behind GEDDs. “Is it individual genes or is it too much DNA? This paper does not settle that question for us,” said Salehi. “That would be a huge finding if ever we find that there are particular genes that are able to massively regulate the expression of other genes.”

Antonarakis’s team next plains to investigate the possible impact individual genes may have on transcription regulation in Down’s syndrome. 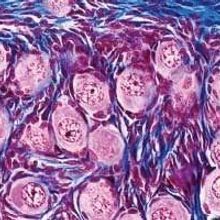