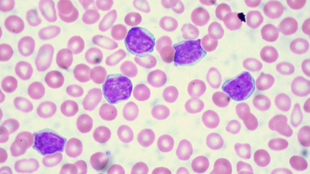 Blood cells from a patient suffering from chronic lymphocytic leukemiaFLICKR, ED UTHMANScientists have combined the ability to reprogram stem cells into T cells with a recently developed strategy for genetically modifying patients’ own T cells to seek and destroy tumors. The result is the capacity to mass-produce in the laboratory an unlimited quantity of cancer-fighting cells that resemble natural T cells, a type of white blood cell that fights cancer and viruses. In a study published today (August 11) in Nature Biotechnology, researchers show that the genetically engineered cells can effectively wipe out tumors in a mouse model of lymphoma.

“To put these two techniques together is really groundbreaking,” said Pam Ohashi, a cell biologist at the Ontario Cancer Institute, who was not involved in the study. “The idea that you can make unlimited numbers of tumor-killing cells is very exciting.”

Earlier this year, a team...

Now, Sadelain’s team has used cell reprogramming technology to grow in a dish large quantities of precursor T cells that can be can be genetically modified to identify and eliminate tumors, potentially making immunotherapies for certain types of cancer more widely available.

“This is the first proof of principle that it is feasible to use a differentiated-directed process to generate lymphoid T cells endowed with therapeutic properties in vitro,” said Sadelain.

Sadelain’s team isolated T cells from the peripheral blood of a healthy female donor and reprogrammed them into stem cells. The researchers then used disabled retroviruses to transfer to the stem cells the gene that codes for a chimeric antigen receptor (CAR) for the antigen CD19, a protein expressed by a different type of immune cell—B cells—that can turn malignant in some types of cancer, such as leukemia. The receptor for CD19 allows the T cells to track down and kill the rogue B cells. Finally, the researchers induced the CAR-modified stem cells to re-acquire many of their original T cell properties, and then replicated the cells 1,000-fold.

“By combining the CAR technology with the iPS technology, we can make T cells that recognize X, Y, or Z,” said Sadelain. “There’s flexibility here for redirecting their specificity towards anything that you want.”

Yet questions remain about exactly what kind of cell the researchers created. “It’s really an unknown population of cells,” said Ohashi.

Sadelain’s team used gene expression microarrays to compare the mRNA expression profiles of the engineered T cell precursors with several types of natural T cells from the female donor. The analysis revealed that the engineered cells more closely resemble the gd T cell subtype that is involved in an initial broad-spectrum immune response, rather than the αβ subtype, the so-called adaptive subtype, which is slower to respond, but retains a memory of its exposure to various antigens.

Next, the researchers showed that the genetically engineered T cells lysed tumors in an in vitro mouse lymphoma cell line. In addition, precursor T cells injected into tumor-bearing mice were shown to produce a strong anti-tumor response, similar in strength to that of the donor’s natural gd T cells that had been modified to express the CD19 receptor. “They function just as well as T cells we harvested from peripheral blood,” said Sadelain.

“What they’ve shown is that you can engineer these cells into some kind of T cell,” said Michael Kalos, a cancer researcher at the University of Pennsylvania, who was not involved in the study. “You can grow these cells in an antigen-driven manner to large numbers and . . . they have effector functions.”

Sadelain’s group is not the first to derive T cells from stem cells. Last year, two groups in Japan grew T cells from iPSCs, but unlike the current study, the Japanese studies failed to fully compare the derived T cells with natural T cells, nor did they create enough T cells to test in vitro.

Sadelain said that before any treatment based on the new cells is ready for clinical trials, much work is needed to assess the cells’ safety and to understand more about their biological nature.