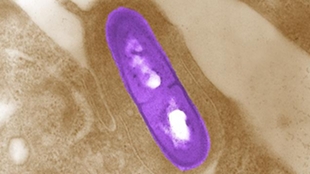 The notion of using bacteria to attack tumors—often by helping to elicit an anti-cancer immune response or delivering a chemotherapeutic agent to cancer cells—is not new, noted Robert Hoffman, a cancer biologist at the University of California, San Diego, who was not involved in the current study. Hoffman’s own research on engineered Salmonella has shown that the bacteria can kill mouse cancer cells, including metastases of pancreatic cancer. And a Listeria strain called CRS-207 that...

It’s a “new combination” of approaches, and the combo synergistically targets metastases, wrote Jozef Anné, a molecular bacteriologist at Katholieke Universiteit Leuven in Belgium who did not participate in the research, in an email to The Scientist.

Previous research has demonstrated that an attenuated strain of Listeria monocytogenes, a type of bacterium that penetrates host cells during infection, selectively killed breast cancer cells without damaging normal tissue, explained Claudia Gravekamp, an immunologist at Albert Einstein College of Medicine who led the study with nuclear medicine researcher Ekaterina Dadachova. The bacteria’s ability to target only diseased cells raised the possibility that it could be used to treat metastatic cancer by both directly killing cells and by carrying anti-tumor therapies—like radiation—to cancer cells.

Gravekamp and Dadachova tested the bacteria against highly metastatic pancreatic cancer in mice. First, they demonstrated that, as in their breast cancer model, the bacteria proliferated well in the animals’ metastases, but poorly in the primary tumor, and not at all in normal tissues like spleen—suggesting the bacteria would be good candidates for delivering a therapy to far-flung metastases. Then, the researchers armed the Listeria with the Rhenium-188, a radionuclide that kills cells by releasing DNA-damaging radiation and has shown promising results in a handful of early stage trials against a variety of cancers. Sure enough, regular injections of Rhenium-188-labeled L. monocytogenes decreased metastases by 90 percent over saline-injected mice.

While this implies that bacteria have to potential to be used to deliver therapeutic radiation doses to metastases, the bacteria were administered before metastases were established “so to some extent it’s a prevention model,” noted Donald Buchsbaum, a radiation biologist at the University of Alabama at Birmingham who was not involved in the study. Most likely the treated mice still would have died of their remaining metastases, and future work will need to focus on targeting established metastases, possibly by exploring other radioisotope options, he wrote in an email to The Scientist.

Gravekamp and Dadachova are currently refining their protocol and examining alternative radioisotopes to achieve a 100 percent reduction of metastases, but have high hopes for their bacteria. Though primary tumors are often removed surgically, even small pieces left behind can produce new metastases. It might be possible that one day radioactive Listeria could be part of an “early second-line treatment after surgery . . . to prevent further metastases,” said Gravekamp.