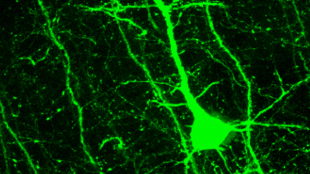 Fluorescently-labeled neuron in cortex from mouse with amblyopia treated with soluble PirB. DR. MAJA DJURISIC AND RICHIE SAPP, DEPARTMENT OF BIOLOGY, STANFORD UNIVERSITYThe time window for the brain to develop optimal connections based on learning and experience is relatively short-lived, occurring prior to adulthood. But this neuroplasticity can be restarted in the visual cortex of adult mice, according to the results of a study published today (October 15) in Science Translational Medicine. Directly inhibiting the activity of a protein, known to put a brake on neural plasticity early during post-natal development, resulted in growth of new neural synapses and restored eye sight in adult animals with so-called “lazy eye.”

“There is a lot of interest in the ‘critical period’ of development when the brain is plastic and undergoes a lot of changes and learning,” said Christiaan Levelt, who studies the biology of visual plasticity at the Netherlands...

“At its heart, this is about understanding why it gets harder to learn new things as we get older and whether this is something that we can reverse if we knew the right molecules to target, by either adding them back or by suppressing them,” said study author David Bochner, who just completed his PhD research at Stanford University.

Bochner, his Stanford advisor Carla Shatz, and their colleagues took the latter approach. Shatz’s laboratory had previously discovered that the paired-immunoglobulin–like receptor B (PirB) protein, expressed in a subset of neurons in the brain, works to halt the plasticity of the visual cortex: a knockout PirB mouse has better plasticity in this part of the brain throughout its life. In the current study, the researchers disrupted PirB function—either genetically or biochemically—and saw new, functional synapses form, demonstrating that even when PirB is inhibited in a short, one-week time frame, new neuron connections—and recovery from lazy eye—is possible in an adult mouse.

“What was really surprising was the creation of new synapses in the adult brain,” said Shatz. “We didn’t expect to see such a stark result.”

In mammals, the visual system fully develops after birth when the visual cortex of the brain learns to process input from the eyes. If vision in one eye is diminished, the other eye makes stronger neuronal connections in a larger portion of the visual cortex while the neurons relaying information from the poor-seeing eye all but shut down, a condition called amblyopia, or lazy eye. “This is an example of the use-it-or-lose-it principle,” said Shatz. The condition can be repaired during a critical period of development—up to about four weeks after birth in mice and age six in humans—by closing the good eye and allowing the impaired one to work on its own.

To understand whether inhibiting PirB would increase brain plasticity and restore vision in mice with lazy eye, the researchers first used a conditional PirB knockout, deleting the protein either during the critical period or in adulthood of mice with amblyopia. A depletion of PirB for several days in both the adult and juvenile mice resulted in increased neural plasticity, measured by an expansion of the visual cortex area that responds to the lazy eye.

The researchers next created a therapeutic—a soluble form of a portion of PirB that, when injected directly into the visual cortex, acted as a sink for the PirB ligand, reducing its function. This protein therapy increased neuronal plasticity in both adult and juvenile amblyopic mice similarly to the genetic strategy. Furthermore, the protein-based therapeutic increased the density of dendritic spines—the small protrusions from the neuron’s cell body extensions that receive input—in the visual cortex neurons and restored vision in adult mice.

Levelt notes that understanding and reactivating the capacity for brain plasticity throughout life could help treat victims of brain trauma or those with neurodevelopment disorders. Elizabeth Quinlan, who studies amblyopia and synaptic plasticity in the adult visual system at the University of Maryland, agrees. “Reactivated plasticity could be harnessed to promote recovery of damaged sensory input, and to promote learning in disabled and healthy brains,” she said. “PirB is a potential target for therapeutic interventions in humans, especially if antagonists of PirB are developed that could cross the blood brain barrier, and be targeted to specific cortical regions or synapses.”

Shatz would next like to measure the eyesight in the mice with amblyopia depleted of PirB to directly understand the extent of the recovery of visual function and whether acutely eliminating PirB can have a lasting effect on neuronal plasticity. The team would also like to one day develop a pill version of the PirB inhibitor, Shatz said.

The lab has also shown that mice without PirB are partly resistant to memory loss in an Alzheimer’s model. “This suggests that maybe the same drug for vision loss could also work for Alzheimer’s disease,” Shatz said. “No one yet knows how to tap into the brain’s inherent ability to make connections, but it’s something exciting to try to understand.”