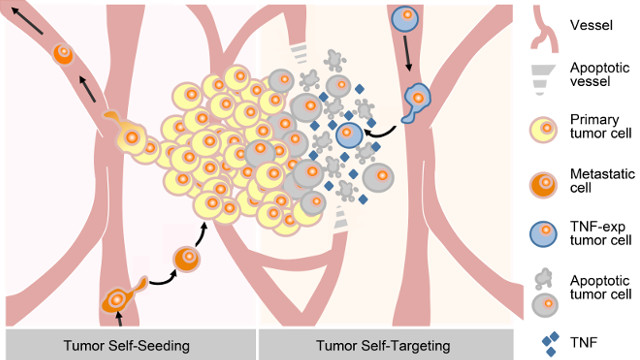 Schematic of the process of tumor cell self-targetingUNIVERSITY OF TEXAS MD ANDERSON CANCER CENTER, ELEONORA DONDOSSOLAFive years ago, scientists at the Memorial Sloan Kettering Cancer Center in New York City showed that circulating tumor cells (CTCs) could both colonize new metastases and travel back to their tumors of origin. Taking advantage of this bidirectional CTC movement, researchers at the University of New Mexico and their colleagues injected mice with CTCs that were genetically modified (GM) to express an anticancer cytokine. In a mouse study, the researchers found that these GM CTCs were able to home to tumors and release the cytokine, leading to decreased tumor growth. The results, published today (February 8) in PNAS, suggest cancer cells may be useful tools for anticancer therapies.

“This paper is an elegant example of thinking outside the box,” said Elizabeth Comen, a medical oncologist and researcher at Memorial Sloan...

“The idea is interesting and audacious,” Joan Massagué of Memorial Sloan Kettering, who was a coauthor on the 2009 paper showing bidirectional CTC movement but was not involved in the present study, wrote in an email to The Scientist.

The University of New Mexico’s Wadih Arap, Renata Pasqualini, and their colleagues engineered murine tumor cells derived from three tumor types—melanoma, lung, and mammary adenocarcinoma—to express and release tumor necrosis factor alpha (TNF-α). TNF-α is a cytokine shown to damage tumor vasculature, among other anticancer activities. “It’s extremely potent as an anticancer agent but also extremely toxic, which makes it a perfect payload to use as a targeted agent,” Pasqualini told The Scientist. “When given only locally, the efficacy is increased and the toxicity decreases.”

When any of the three types of TNF-α–expressing CTCs were injected into immunocompetent mice with implanted mammary adenocarcinoma, the tumors’ growth rates were reduced. Challenging the mice that had the TNF-α–expressing tumor cells in circulation with additional, cancer-initiating tumor cells appeared to prevent the formation of tumors, suggesting that the GM CTCs helped protect mice from new tumors. The researchers also observed that the TNF-α–expressing CTCs did not propagate in vivo. “The cells that are producing TNF eventually die, so we are not injecting cells likely to backfire,” which could fuel cancer growth, said Pasqualini. “They are surrounded by TNF-α—booby-trapped, so to speak.”

When injected into mice with the corresponding primary tumors, each of the three TNF-α–expressing CTC lines resulted in inhibition of tumor growth by 50 percent to 65 percent, the researchers reported.  Injecting the GM CTCs into the bloodstream appeared more effective than subcutaneous administration, they noted.

“While so many scientists are trying to design nanoparticles delivery agents to bring drugs selectively to tumors, [the authors] have capitalized in the inherent ability of certain tumor cells to "’elf seed,’” Bruce Zetter, who studies the mechanisms of tumor progression at Harvard and was not involved in the work, told The Scientist in an email. “It’s appealing that the tumor cells should be able to find their counterparts both in primary and in secondary tumor sites.”

Using TNF-α as a “warhead” was a good first choice, wrote Zetter. “TNF-α is probably working here principally as an antivascular agent. . . . One can imagine that others will employ many different types of agents over time.”

Comen noted that the challenge, now, will be to make sure the GM CTCs don’t contribute to metastasis. To Arap’s mind, irradiatiating the engineered cells—so they cannot divide—is one potential solution. (In the present study, the researchers showed that irradiated GM CTCs inhibited tumor growth, but not to the same extent as nonirradiated GM CTCs did.)

Going forward, Massagué said he would like to see an attempt to target an endogenous tumor in mice with modified CTCs derived from the same tumor. “If that experiment worked, the [cancer] field would get excited,” he told The Scientist.