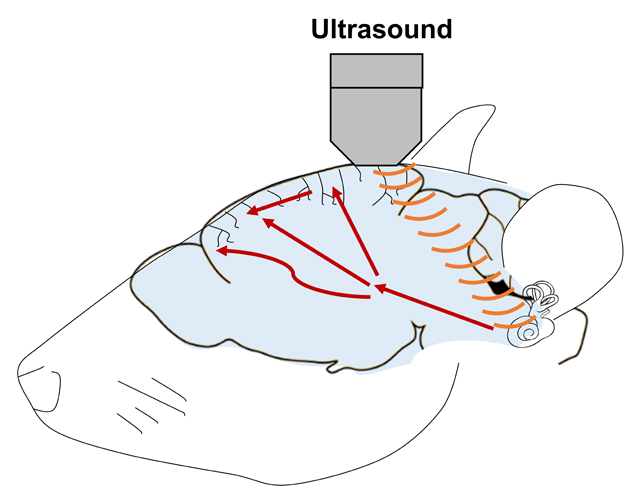 Ultrasound activates auditory pathways in the rodent brain (red arrows) regardless of where in the brain the ultrasound-generating transducer is placed.COURTESY OF HONGSUN GUO AND HUBERT LIMActivating or suppressing neuronal activity with ultrasound has shown promise both in the lab and the clinic, based on the ability to focus noninvasive, high-frequency sound waves on specific brain areas. But in mice and guinea pigs, it appears that the technique has effects that scientists didn’t expect. In two studies published today (May 24) in Neuron, researchers demonstrate that ultrasound activates the brains of rodents by stimulating an auditory response—not, as researchers had presumed, only the specific neurons where the ultrasound is focused.

“These papers are a very good warning to folks who are trying to use ultrasound as a tool to manipulate brain activity,” says Raag Airan, a neuroradiologist and researcher at Stanford University Medical Center who did...

Over the past decade, researchers have used ultrasound to elicit electrical responses from cells in culture and motor and sensory responses from the brains of rodents and primates. Clinicians have also used so-called ultrasonic neuromodulation to treat movement disorders. But the mechanism by which high frequency sound waves work to exert their influence is not well understood.

We’re very optimistic that now that we know that it’s there, we will be able to design ways to get around it and still be able to use this technology scientifically.—Mikhail Shapiro,
Caltech

The University of Minnesota’s Hubert Lim studies ways to restore hearing, but many of the strategies that his group uses are invasive, such as cochlear implants, which require surgery to insert a device inside the ear. He says that he and his colleagues were excited by the prospect of using noninvasive and precise ultrasound to activate the parts of the brain responsible for hearing.

Lim’s team started by stimulating the brains of guinea pigs with audible noise or with pulsed ultrasound directly over the auditory cortex. They were surprised to observe similar neuronal responses to the two different stimuli because ultrasound is outside the spectrum that the guinea pigs—and humans—can hear. The researchers also found that the rodents’ neurons showed comparable electrical activity in the auditory cortex regardless of where in the brain the researchers directed the ultrasound. This raised the question: are the animals’ brains responding directly to the ultrasound or to responses of the auditory system?

When the authors cut the guinea pigs’ auditory nerves or removed their cochlear fluid, the guinea pigs stopped responding to the ultrasound and to audible noise. Lim’s team concluded that what must be happening is ultrasound moves through brain tissue and vibrates the cochlear fluid. This vibration then triggers auditory signaling and indirectly activates the auditory cortex and other brain regions, rather than ultrasound having a direct effect on the activity of the neurons.

“I am actually very hopeful that ultrasound can be a powerful tool that can not only modulate but also treat different neurologic and psychiatric disorders, and that it can achieve a noninvasive yet localized activation,” says Lim. “But what we’re trying to show in this paper is that there are many confounding effects that are actually happening with ultrasound, and we have to remove those effects to really see how it’s activating the brain.”

A coauthor on the companion study, Mikhail Shapiro of Caltech, says that previous work showing that it is possible to apply ultrasound to the brains of mice and rats to elicit electrical activity and movement in their limbs left him and his colleagues curious about how it works. To determine where and when neural activation happens, they applied ultrasonic pulses to the brains of transgenic mice that have neurons that light up when stimulated. As with guinea pigs, ultrasound is inaudible to mice.

“To our surprise, we found that the main activation pattern that we were seeing was not in the region where we were applying the ultrasound directly, but actually in the auditory areas of the brain, those responsible for processing information about sound,” Shapiro tells The Scientist.

Consistent with the findings of Lim and colleagues, Shapiro and his coauthors determined that the mouse brains lit up across the cortex, starting from the auditory cortex. And as in the guinea pigs, the mouse neurons responded similarly to ultrasound and audible sounds. The researchers also showed that both ultrasound and audible noise elicited motor movements that decreased when they used chemicals to deafen the mice.

“We’re not trying to imply that [the effects of ultrasound observed in previous studies are] due to this auditory side effect,” says Shapiro. “We’re very optimistic that now that we know that it’s there, we will be able to design ways to get around it and still be able to use this technology scientifically.”

Shy Shoham, a neuroscientist and biomedical engineer at New York University Langone Medical Center who did not participate in the studies, tells The Scientist that these papers highlight how careful researchers must be in the future when using ultrasound to modify neuronal function. “In the field of neural stimulation in general, we should always be very concerned about off-target effects,” he says. We must “delineate what is real and what isn’t.”

“The big take home point here is that we need to take care of the auditory effects,” says Kim Butts Pauly, who studies ultrasound neuromodulation at Stanford University Medical Center and who coauthored the accompanying commentary with Airan. “There’s been very compelling data from other studies that ultrasound can stimulate the brain and change recordings from the brain that are completely separate from any auditory effects. As we get rid of the auditory effects, then the more subtle effects may become apparent.”