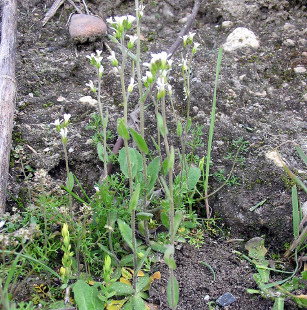 WIKIMEDIA, ALBERTO SALGUEROScientists are finally getting a glimpse into how defense hormones shape plant health both above and below the soil, thanks to a study published today (July 16) in Science. The results show how an Arabidopsis thaliana defense hormone, salicylic acid, which helps protect the health of the plant’s shoots and leaves, also guides the growth of microbial communities in and around its roots.

“This is the first study that really tied this phytohormone to the microbiome associated with the root,” said Xinnian Dong, a professor of biology at Duke University who was not affiliated with the work.

Commensal root microbes can confer numerous benefits to a plant, including increased tolerance to environmental stressors like heat, drought, and acidity, and aid in the plant’s acquisition of nutrients. However, little is known about how plants might influence their underground microbial communities, or how a plant’s immune system...

To explore these interactions, the University of Tennessee’s Sarah Lebeis and her colleagues grew mutant strains of A. thaliana that were deficient in either the biosynthesis or signaling detection of different key defensive immune hormones, including salicylic acid, jasmonic acid, and ethylene. They then used DNA sequencing to profile the bacterial communities found in and around the mutant plants’ roots.

When they compared the bacterial profiles of mutant and wild-type A. thaliana, the researchers found significant differences in root bacterial populations not only at the strain- and species-levels, but also at higher taxonomic orders.

“In some of our mutants we saw what we call a loss of control. Microbes that shouldn’t have been there were there,” said Lebeis, an assistant professor of microbiology.

In A. thaliana shoots and leaves, the production of salicylic acid helps the plant ward off pathogenic bacteria by triggering a broad range of immune responses, including the increased production of antimicrobial agents. However, the compound appears to play a slightly different role in the root system, increasing the abundance of some microbes while decreasing or eliminating others.

“Certain [microbes] were not actually able to get into or onto the salicyclic acid-deficient roots,” said study coauthor Jeff Dangl, a professor of biology at the University of North Carolina, Chapel Hill. “This implies that in the wild type plant, salicylic acid is actually required to recruit those microbes.”

“It is interesting that there is this contrasting role of the plant hormone in the shoot and in the root,” said Dong. “The root tissue is exposed to microbes constantly—almost like an inside-out intestine. There are beneficial microbes and pathogenic ones, so you don’t really want to have a defense mechanism that inhibits the beneficial microbes.”

Lebeis said it is still unclear how the biosynthesis of salicylic acid in A. thaliana appears to attract some types of bacteria to the root while blocking others, though she did note that a few select microbes are able to use salicylic acid as a carbon source. She added that the results do not indicate whether it is salicylic acid that performs this function versus a modified version or degradation product of the hormone.

James Kremer, a PhD student studying the plant microbiome at Michigan State University who was not affiliated with the research, cautioned that identifying bacterial populations through DNA sequencing does not capture the fully complexity of plant-microbe interactions. “It doesn’t show anything about who is actually alive and who is doing things, who is expressing genes, who is making proteins,” he said.

However, he continued, “it is a huge advance for the field—the fact that they were able to identify any differences [in bacterial population] at all.”

“One of the major future directions in sustainable agriculture is utilizing all of these microbes in the soil,” Kremer said.  “Right now we have no idea how to engineer a plant to help recruit these [beneficial bacteria]. This [result] is a nice building block for getting there.”