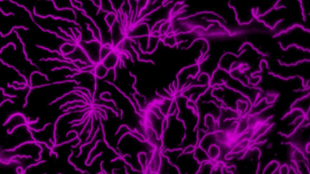 In August, the Centers for Disease Control and Prevention announced that the 30,000 US cases of Lyme disease that are reported to the CDC each year likely represent only a tenth of the diagnoses, which the agency estimated at closer to 300,000. The prevalence of Lyme disease in the Northeast and upper Midwest makes learning more about the spirochete bacterial species that causes Lyme, Borrelia burgdorferi, a scientific priority. A group of researchers from the University of Calgary in Canada and the University of Connecticut Health Center have now shown that a bacterial protein, HrpA, is an RNA helicase that regulates RNA post-transcriptionally, which is necessary both for tick transmission of the microbe and for infection of a mouse host by B. burgdorferi. Their work was published today (December 19) in PLOS Pathogens.

Many bacterial species have an HrpA gene in their genomes, and HrpA was predicted—based on its sequence—to encode an RNA helicase with ATPase activity. The scientists showed in vitro that HrpA could function as both an RNA helicase that unwound double-stranded RNA and as an ATPase that cleaved phosphate groups from ATP. When they mutated HrpA at sites that were predicted to be important for helicase or ATPase function based on identity with other known helicases, the team saw a decrease in both activities in vitro. “We all knew that bacteria had these helicases,” said Scott Samuels, a professor in the division of biological sciences at the University of Montana, who edited the paper, “but nobody had ever shown that they were, in fact, RNA helicases or what they were doing.”

During its life, the spirochete cycles between tick vector and vertebrate reservoir. B. burgdorferi mutants of HrpA had been previously shown to be unable to infect a mouse, and the researchers confirmed that the loss of infectivity was due to the mutation in HrpA by replacing the mutant with an intact gene, which restored the spirochete’s ability to live in the animal. They also tested different mutants of HrpA and found that the ATPase activity of the protein seemed to be the most important protein function for infecting mice. The team showed that, although HrpA mutant bacteria survived within the tick as well as wild-type bacteria, the mutant could not be transmitted to a mouse via tick bite. “This helicase is quite important in both parts of the life cycle” of B. burgdorferi, said coauthor George Chaconas of the University of Calgary.

“The potential defect in tick transmission is very interesting,” said National Institute of Allergy and Infectious Diseases scientist Patricia Rosa, who was not involved in the research, “but additional experiments are needed to determine precisely where it occurs and what causes it.”

In order to figure out what makes HrpA seem so important, the researchers compared the mutant and wild-type spirochetes. RNA levels were mostly unchanged in B. burgdorferi HrpA mutants, but protein levels differed, as compared to strains with normal HrpA. The researchers found changes in RNA transcript length and structure in five of the genes with lower amounts of protein in the mutant, suggesting that HrpA played a role in processing RNA. “This regulation is not at the transcriptional level. It’s at the post-transcriptional level,” said coauthor Justin Radolf from the University of Connecticut Health Center. And because it regulates multiple genes, “this is a global regulator,” he added.

“The outstanding question that this study raises is which proteins or RNAs that are missing or altered in the helicase mutant account for the observed defect in spirochete transmission and infection,” said Rosa.

Coburn agreed that this question is the next step. “It would be interesting to see if they could generate an HrpA mutant that for instance affects . . . one particular gene, but not others to really test whether regulation of each particular gene . . . is critical for Borrelia to be able to cause infection in mammals and be transmitted by ticks,” she said.

The researchers are now devising ways to examine how, where, and when HrpA regulatory function is necessary in the spirochete life cycle. “One of the challenges for this research in taking it forward is to develop strategies to figure out which are the most important targets of this helicase that are hindering this bacterium both in the tick and the mammal,” said Radolf.

“Separating where [in the spirochete life cycle] a gene functions can often be very difficult,” said coauthor Melissa Caimano from the University of Connecticut Health Center. “One of the things that we’ve come to recognize in the last few years is how intricate the transmission process actually is, but having an understanding of the transmission process itself will help us understand how each of the genes individually contribute.”