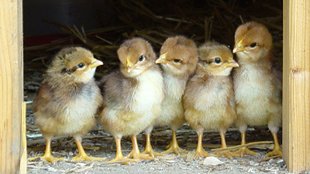 WIKIMEDIA, HERBERTTA report published today (August 27) in PLOS Biology tells the surprising story of reticuloendotheliosis virus (REV) evolution and how, in the 1930s, unwitting malaria researchers were most likely responsible for transmitting REV from mammals to birds. The report highlights the importance of modern-day virus monitoring to limit potentially adverse transmission effects.

“It’s a very interesting story. That malarial research could have led to zoonosis from mammal to bird is pretty surprising,” said Eric Delwart, a professor of laboratory medicine at the University of California, San Francisco, who was not involved in the research. “It’s basically an example of a contamination that went rogue . . . and extraordinary bad luck.”

Retroviruses integrate into genomic DNA of host cells to borrow the cells’ transcription machinery and replicate. On occasion, such integration events happen in germline cells—such as sperm and eggs—and can thus be passed on to offspring,...

While studying the viral fossils of Madagascan mammals, Gifford made a surprising discovery. “We turned up this sequence in the ring-tailed mongoose genome that was very closely related to REV,” he said.

REV is a retrovirus that infects poultry and wild game birds, causing an array of disease symptoms, including anemia, immunosuppression, and the production of runts. Evidence from genome sequencing studies had suggested that it originated in mammals, but most sequence similarities mapped only to fragments of REV. Because of these fragmented similarities, “I had always assumed, as had probably other virologists, that these viruses had been circulating in birds for a long time,” said John Coffin, a professor of molecular biology and microbiology at Tufts University in Boston, who also was not involved in the work.

The copies of REV fossils Gifford found in two species of mongoose, however, showed full length similarity to bird REVs. “It made us curious because it is very unusual to have an avian retrovirus be so closely related to a mammalian retrovirus,” he said. “It suggested that there had been a transmission quite recently.” Indeed, the exchange turned out to have occurred less than a century ago.

After finding the REV sequences in mongoose, and a paper desribing a full-length REV in the egg-laying mammal echidna, Gifford analyzed the genomes of another 42 mammalian species, again finding nothing but REV fragments. He then analyzed the sequences of all known REVs isolated from birds to determine which were most similar to the mongoose and echidna REVs, and therefore, which species was likely to have been infected first.

The most similar bird REVs were two that had been isolated separately from ducks—one in 1959, the other in 1972.  Importantly, the source of REV infection in these animals was deemed to be contaminated stocks of Plasmodium lophurae—a malarial parasite. In fact, evidence of a then-unknown infectious agent contaminating stocks of P. Iophurae had surfaced as early as 1941.

Continuing the historical detective work, Gifford discovered that P. lophurae had been isolated just once, in 1937, from a Bornean Crested Firebacked pheasant at the New York Zoological Park (now the Bronx Zoo). Researchers planned to use this bird parasite as a model for studying human malaria, and after isolating it from pheasant, they had passaged the parasite in chickens for mass production.

Exactly how the Bornean pheasant, or the chickens in which P. iophurae was passaged, became infected with a retrovirus from a mammal remains a mystery. The close proximity of exotic animal species in the zoo might have been to blame for the initial infection, Gifford said, but it’s likely that the repeated passaging in chickens provided the virus with the ideal opportunity to adapt to its new avian host.

Since its transmission to birds, REV has been spreading like wildfire. It has even become integrated into two different large DNA bird viruses—fowl poxvirus and gallid herpesvirus 2—generating new recombinant strains that today circulate in wild birds and poultry. “In a very short period of time the disease has became quite widespread,” said Jonathan Stoye, a researcher at the MRC National Institute for Medical Research in London. “It indicates that retroviral transmission needs to be taken seriously.”

Although such transmissions are likely to be rare, and standards for detecting extraneous infectious agents have dramatically improved since the 1930s, Delwart added that the Food and Drug Administration and other regulatory agencies are developing viral monitoring standards “so that manufacturers of human vaccines and other biologicals can start testing their products.”