DH511.2_K3, an engineered hybrid antibody L.D. WILLIAMS ET AL., SCI. IMMUNOL. 2, EAAL2200 (2017)Thanks to its diversity and tendency to mutate, HIV is a notoriously problematic vaccine target. Researchers have found hope in the existence of rare, naturally occurring antibodies that can neutralize multiple HIV strains, called broadly neutralizing antibodies. In a study published in Science Immunology today (January 27), a group of researchers based at Duke University in Durham, North Carolina, described a unique lineage of broadly neutralizing antibodies from a chronically infected donor’s B cells and plasma that can bind a hard-to-access part of the virus.

“It is a breakthrough because most of us thought that we wouldn’t be able to develop these antibodies in the first place,” said Nelson Michael, who directs the HIV research program at the Walter Reed Army Institute of Research in Silver Spring, Maryland, and was not involved in the...

“The body doesn’t want to make these kinds of antibodies straight away,” said study coauthor Barton Haynes, an immunologist at Duke and director for the Duke Center for HIV/AIDS Vaccine Immunology and Immunogen Discovery. That’s what made this donor’s cells and blood so rare. “The study of this individual has given us a treasure trove of information,” said Haynes.

The researchers found seven memory B-cell clones—or groups of cells with the same ancestor—that could bind a piece of the HIV envelope protein called the membrane-proximal external region (MPER). They saw that the antibodies produced by one of the clones neutralized envelope proteins from 206 of 208 different HIV strains from all over the world.

In a first for the HIV field, the team also probed the donor’s plasma for MPER-binding protein using a technique developed by George Georgiou, a biomedical engineer at the University of Texas at Austin, which incorporates mass spectrometry to determine the protein sequences of each antibody. This approach, Georgiou explained, enabled the team to focus on the antibodies that were actually released into the blood. “Only a few of these memory B cells somehow are selected to be expanded greatly and produce antibodies that are present at serological levels,” he said.

David Weiner, a molecular immunologist at the Wistar Institute in Philadelphia, said that HIV researchers have previously bypassed the plasma since it’s much easier to isolate the genes that code for broadly neutralizing antibodies straight from B cells than it is to rebuild those genes from protein sequences. Georgiou’s group accomplished the latter by comparing the protein sequences of the plasma antibodies to the genetic sequences that Haynes’s group found within MPER-binding memory B cells. From there, Haynes said, the team took the best antibodies from each arm of the study and mixed and matched the genes that code for the heavy and light protein chains of each antibody. “We just made a whole series of swaps,” he explained, and then screened the molecules for neutralizing activity. The group is now testing one resulting antibody hybrid in animal models of HIV.

The Duke team reconstructed the history of their MPER-binding clones to infer what kind of antibodies the cells’ common B-cell ancestor made. Haynes said he and his colleagues have engineered the genes coding for the common B-cell ancestor’s antibodies into mice. Next, they will test vaccines for their ability to coax the animals’ B cells—through many rounds of cell replication and selection—into making broadly neutralizing antibodies similar to those found in the chronically infected donor.

Although this study is an advance toward designing a broadly neutralizing vaccine, Michael said, it’s just the first “base camp” on the way up the vaccine equivalent of Mount Everest. “Getting to the second base camp would be breaking [immune] tolerance,” he told The Scientist. To achieve that, he said, “you’re looking at probably a 10-year series of experiments.” 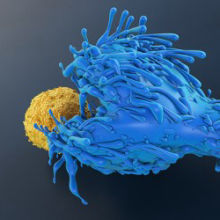