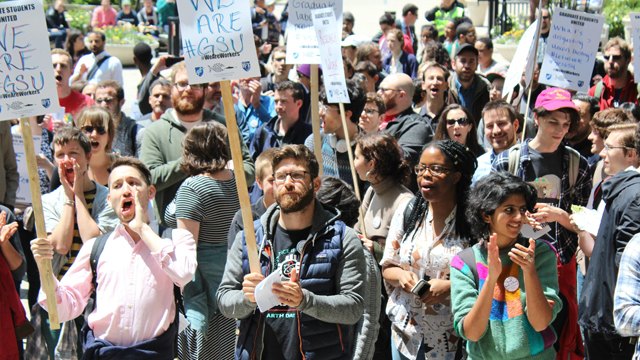 University of Chicago graduate students at the March on the Boss rally, a pro-unionizing event, held May 25, 2017CLAUDIO GONZÁLESIn a National Labor Relations Board (NLRB) election last week (October 17-18), University of Chicago teaching and research assistants voted to authorize Graduate Students United (GSU) as their collective bargaining representative. With about two-thirds of eligible students participating, the results were 1,103 for and 479 against.

This outcome “means that a strong majority of the students want a say in decisions on campus,” says Daniela Palmer, a sixth year University of Chicago evolutionary biology graduate student, who is a departmental organizer for GSU. “Legally, [it] means that we now have the power to bargain collectively in good faith with the university.”

[The university] threw everything possible at them to stop this from happening, and the students did an amazing thing. It should be a message to graduate...

The election was made possible by an August 2016 decision from the NLRB, an independent federal agency that oversees labor law in the United States. Its decision stated that graduate student workers at private universities are employees under the National Labor Relations Act and can therefore choose to seek union representation. This decision overturned a 2004 NLRB ruling that students are not employees and paved the way for the Graduate Workers of Columbia at Columbia University in New York to hold their own successful election in December 2016.

There are at least 33 graduate student unions in the U.S., most of them at public universities. GSU has been a driving force for increases in pay, benefits, and support for graduate student workers since its formation in 2007. GSU’s election as a recognized union means that the university must now bargain with GSU in good faith. Palmer says that it’s not clear how quickly GSU and the university will come to the bargaining table to negotiate a contract that could then be ratified by GSU members.

On September 22 this year, legal representatives of the University of Chicago filed a request that the NLRB reconsider and reverse its 2016 decision, which is still pending, according to university spokesperson Marielle Sainvilus. Several days later, the university’s legal team also filed a motion, unsuccessfully, to put a hold on the election.

“We continue to have concerns about the impact of a graduate student union on the University’s mission of creating and imparting knowledge through direct mentorship, teaching and individually guided research and writing,” Sainvilus writes in an email to The Scientist. According to a September 2017 announcement from the University of Chicago provost’s office, concerns include the effect unionization will have on faculty-student relationships and academic freedom.

University of Chicago graduate students at a pre-election rally on October 16, 2017CLAUDIO GONZÁLES

Gordon Hewitt, who now works in institutional research at Hamilton College in Clinton, New York, authored a study, published in the Journal of Collective Negotiations in 2000, about the influence of graduate student collective bargaining on student relationships with educators. He interviewed faculty at institutions where graduate student unions had existed for at least five years. “The faculty overwhelmingly responded saying that the collective bargaining agreement didn’t affect the relationship at all because . . . they wouldn’t let a third party bureaucratic agent like a union come in between them and their students,” he says, adding that recent research from other groups is consistent with his findings.

We continue to have concerns about the impact of a graduate student union on the University’s mission of creating and imparting knowledge through direct mentorship, teaching and individually guided research and writing.—University of Chicago,
Office of the Provost

Nevertheless, “that has been the excuse for anti-union movements forever,” says Paul Davis, a professor of behavioral and social sciences at Cincinnati State Technical and Community College in Ohio. Davis has been involved in organized labor in higher education for more than 30 years and is now the chairman of the Collective Bargaining Congress of the American Association of University Professors, one of the national union organizations with which GSU is affiliated.

Davis explains that university administrations are rarely in favor of collective bargaining. “Those students at University of Chicago fought against long odds,” he says. The university “threw everything possible at them to stop this from happening, and the students did an amazing thing. It should be a message to graduate students everywhere that it is possible.”

Palmer says that the next steps are voting to determine what issues the GSU will bring to the bargaining table with the university. In general, “the big picture is really about the value of our contributions to the university,” says Palmer. “The more that we raise our voices as a collective, the easier I hope it will be for us to gain power and improve working conditions at universities around the country.”

Correction (November 6): We originally called the NLRB the National Labor Review Board. The Scientist regrets the error.