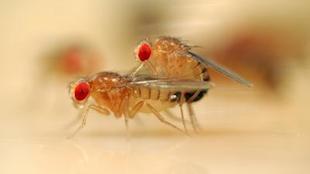 SOLVIN ZANKLResearchers have accumulated detailed knowledge of the neurons that drive male fruit flies’ mating behaviors. But the neurons that prompt females to respond—or not—to male overtures have been less-studied. Three papers published today (July 2) in Neuron and Current Biology begin to change that. They identify sets of neurons in female fruit flies that help process mating signals, modulate the insects’ receptivity to male courtship, and drive mating behavior.

“These three groups independently identified important neuronal groups [that] are positioned in different points in the neuronal circuitry for regulating female receptivity,” said Daisuke Yamamoto, a behavioral geneticist at Tohoku University in Japan who was not involved in any of the studies.

“We’ve had access to the male circuitry for a while now, and that’s turning out to be a really interesting way to study how behavior works,” said Jennifer Bussell, whose work as a...

Female fruit flies’ mating behaviors depend on their reproductive state. They become receptive to mating as they mature, but become less receptive to males’ advances immediately after mating.

If a female fruit fly is receptive to mating, she responds to male pheromones and courtship songs by engaging in a behavior called pausing, where she stops in her tracks near males so they can mount her and she opens her vaginal plates—hard coverings that protect her reproductive tract.

Bussell and her colleagues in Leslie Vosshall’s lab at Rockefeller have identified a set of neurons that help control female pausing in response to courtship. An earlier screen performed by geneticist Nilay Yapici initially sparked the group’s interest in this behavior. Using RNA interference (RNAi), Yapici systematically knocked down genes in female fruit flies housed with male flies and measured how many eggs the flies laid. Her screen identified several genes that seemed to be necessary for normal egg-laying.

These genes included the transcription factor Abdominal-B (Abd-B). Bussell’s team determined that the protein it encodes is expressed in certain peripheral nerves of the abdomen and reproductive tract and that the activity of these neurons is necessary for flies to show receptivity to males.

Next, the researchers sought to determine why dysfunctional Abd-B neurons seemed to diminish reproductive behavior. They found that female flies with Abd-B-silenced neurons were less likely to pause in the presence of courting males than were controls. However, the female flies with silenced neurons showed no difference in their vaginal plate opening and closing, indicating that another set of neurons is responsible for this mating behavior. Activating Abd-B neurons induced pausing behavior.

“The paper . . . is very unique in that they have actually observed female pausing and vaginal plate opening in scoring effects of neuronal activation and silencing of behaviors,” said Yamamoto. While these behaviors have been observed for many years, Bussell and her colleagues have recorded them with an unprecedented level of precision, he explained.

In a different paper, Barry Dickson of the Howard Hughes Medical Institute’s Janelia Farm Research Campus in Virginia and his colleagues identified neurons that help determine whether a female fly will be receptive to mating in the first place.

Ejaculate from male flies contains a molecule called sex peptide, which makes female flies less likely to engage in additional sexual behavior after mating. Dickson and his colleagues previously established that sex peptide interacts with a receptor in sensory neurons of the female reproductive tract.

For the present study, the team identified a secondary set of neurons that relay the message from the reproductive sensory neurons to the Drosophila brain. The cells, called SAG neurons, project into the pars intercerebralis, a portion of the brain that is homologous with the mammalian hypothalamus.

Independently, Janelia Farm’s Bruce Baker and his colleagues identified a set of doublesex-expressing neurons in the brain that appear to regulate female flies’ response to male pheromones and courtship song. Doublesex is a transcription factor gene whose protein is spliced into either male or female versions and that helps determine sex during fly development.

Specifically, the researchers found that activating either of two groups of doublesex-expressing neurons, called the pCd and the pC1 clusters, led to increased receptivity to male overtures, while silencing either of the clusters led to reduced receptivity. Using calcium imaging, the team tracked these neuron clusters in the presence of a male pheromone or of a male courtship song and found that neurons in both clusters responded to the pheromone and that neurons in the pC1 cluster responded to courtship song.

“All three papers describe some neurons in some way that tie into receptivity,” said Dickson, who is also a coauthor of Bussell’s paper. “But how they fit together? There’s no clue at the moment.”

He speculated that the SAG neurons may eventually interact with the doublesex-expressing pCd and pC1 neurons. SAG neurons may dampen sensitivity of the doublesex-expressing neurons to male courtship cues. The action of the Abd-B neurons is likely downstream from any pCd or pC1 activity, added Dickson. The neurons are specifically activated in situations where sensory cues and the fly’s reproductive state combine to signal that it’s time for mating.

“I think it’s a very exciting thing to study, because some place in that female head is integrating a whole lot of information and making a decision,” said Baker. “She’s integrating information from a lot of different sensory modalities and putting it all together to make a decision, and how that’s done is not very clear in almost any case in nervous systems.”