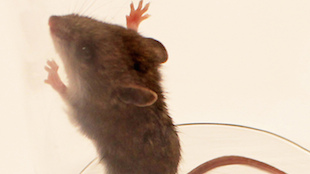 FLICKR, WOODLEYWONDERWORKSA number of studies indicate that stress experienced in very young animals or humans can have negative effects on mental and cognitive health that can later be passed on to offspring through epigenetic modification. But early-life stress in mice can also have positive effects that can be passed on to pups, according to a study published today (November 18) in Nature Communications. The pups of stressed male mice were behaviorally flexible, as shown by their ability to complete tasks that required waiting or adjusting their behavior over time. And these pups had altered modifications in their hippocampi to histones associated with the mineralocorticoid receptor gene, which is involved in stress response.

“People have shown many times that the negative effects of stress can be passed to the next generation,” said Deena Walker, a neuroscience postdoc at Mount Sinai School of Medicine in New York City who...

“The effect of trauma may be overall negative, but [it] may also provide some positive sides,” said study coauthor Isabelle Mansuy, a professor of neuroepigenetics at the University of Zürich and the Swiss Federal Institute of Technology.

Mansuy and her colleagues subjected newborn mice to unpredictable maternal separation combined with unpredictable maternal stress (MSUS) for two weeks. MSUS entails taking away the pups’ mothers at unpredictable intervals and subjecting their mothers to stressful situations, such as being placed in cramped tubes or in cups of cold water. The team was “trying to replicate hectic conditions during early life involving neglect, unpredictability, and unreliable care,” said Mansuy.

The researchers then made the mice complete tasks that required them to follow rapidly changing rules to get water and food. For instance, in one task, the mice got a reward if they poked their noses into a hole at the right time after a delay, signaled by light. When the delay was short, control and MSUS mice performed similarly, but with a longer delay, mice that had been stressed early in life outperformed controls. When the researchers bred MSUS males with wild-type females, the resulting offspring similarly excelled at the nose poke test.

The researchers also performed some tests with only female pups and no fathers, since these tasks required housing mice in group cages that can disturb male hierarchies. In one test, the mice first got a drink if they alternated between visiting two corners of a cage opposite one another. Later, the animals only got the reward if they moved diagonally between the other two corners of the cage. The daughters of MSUS mice successfully completed the tasks more often than control animals did.

“I think [MSUS] provides an advantage in challenging conditions,” said Mansuy. “Because [the mice] have been put in such traumatic conditions . . . they develop strategies to be better when their life is somehow threatened.”

The researchers next set out to determine how the mice were acquiring and passing on these behavioral traits. They decided to examine expression of the mineralocorticoid receptor, which plays roles in stress response, anxiety, and goal-directed behavior. They found that it was underexpressed in the hippocampi of MSUS mice and their pups. While DNA methylation levels between control and stressed mice at the mineralocorticoid receptor were similar, acetylation and and some types of methylation of nearby histones were reduced in the offspring of the MSUS mice.

When the researchers injected mice with enzymes that block acetylation and methylation, the mineralocorticoid receptor’s expression was repressed. Likewise, when they injected mice with these enzymes or blocked the mineralocorticoid receptor, the mice showed similar behavioral changes to those observed in the MSUS mice. The team “did a really nice job using pharmacological inhibitors to sort of replicate the finding that they’d seen with the stressor,” said Walker.

It remains unclear exactly how the stressed male mice pass on their behaviors to pups. The researchers found that the sperm of the stressed fathers had elevated DNA methylation on a promoter for the mineralocorticoid receptor.

But Sarah Kimmins, a reproductive biologist who studies epigenetics at McGill University in Montreal, did not find the DNA methylation findings to be meaningful. “Your methylation is within your error of your assay,” she said. Moreover, she said that the methylation levels were so low that they were unlikely to have a significant biological effect.

Mansuy says that a number of other epigenetic changes could also contribute to transmitting the trait. For instance, previous work out of her lab has indicated that changes in noncoding RNA abundance in sperm can transmit the effects of trauma across generations.

How epigenetic modifications in sperm escape the mass epigenetic reprogramming that comes after fertilization of an egg is still unknown. The general phenomenon of parental stress having effects on subsequent generation is real, said Kimmins. “The question is: How is it happening?”

Mansuy said that her lab continues to work on understanding how the effects of MSUS are transmitted to future generations. For now, the present study suggests that researchers should pay attention to neglect’s slight silver lining. “It was surprising to see that the behavioral flexibility was observed on different tasks, that it was observed in both males and females, and that it was transmitted across generations,” said Mansuy.