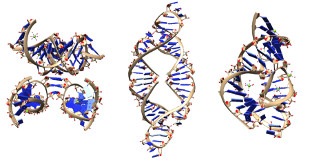 WIKIMEDIA, LUCASHARRRNA self-replication is a key part of the RNA world hypothesis, but generating ribozymes in the lab that can synthesize, replicate, and amplify functional RNA molecules with complex structures has proven difficult. Until now, the most successful variants of the class I RNA polymerase ribozyme have worked inefficiently even on their preferred template: short, simple RNA sequences with a high concentration of pyrimidines.

In a paper published today (August 15) in PNAS, scientists from the Scripps Research Institute in La Jolla, California, report on their use of in vitro evolution to generate an improved polymerase ribozyme that can synthesize multiple functional, structured RNAs and amplify short RNA templates.

The research “has extended the capabilities of RNA to RNA polymerization in ways that have not been achieved before,” said Scott Silverman of the University of Illinois at Urbana-Champaign, who did not participate in the work. “It’s definitely a...

Study coauthors Gerald Joyce and David Horning of Scripps began with a variant of the class I RNA polymerase ribozyme. They introduced random mutations throughout its sequence to generate 100 trillion variants. Joyce and Horning then applied pressure to this population, by priming the ribozymes to complete RNA aptamers—molecules that bind to a synthetic form of vitamin B12 or to GTP. Each round, the researchers selected for ribozymes that produced functional products, products of the correct length, or both.

The researchers increased the stringency of selection for successive generations by requiring the ribozymes to synthesize longer RNA molecules in less time. By the 24th round, the population could synthesize purine-rich, functional RNA sequences.

From this population, Horning and Joyce isolated a variant of the ribozyme called 24-3, which had 17 mutations. The 24-3 polymerase used all four bases and functioned much more quickly than the starting polymerase. It was capable of copying multiple functional RNAs with complex secondary structures, including aptamers, other ribozymes, and yeast transfer RNA (tRNA). The researchers showed that 24-3 could also amplify short RNA templates exponentially in an RNA-only version of PCR.

“It’s really beautiful work and a major step towards the realization of RNA self-replication,” Philipp Holliger of the MRC Laboratory of Molecular Biology in Cambridge, U.K., who did not participate in the work, wrote in an email to The Scientist.

“What Horning and Joyce have done here is a wonderful step forward,” said Donald Burke-Agüero of the University of Missouri, who also did not participate in the research. “It puts us much closer to having an RNA replication system that can sustain replication of RNA, but it’s not there yet.”

Joyce, Horning, and colleagues are working to overcome this limitation with ongoing in vitro evolution experiments. Stricter selection criteria should prompt the ribozyme to make larger, more complicated functional products more efficiently, the researchers said, though it’s not clear how many test tube generations it will take to achieve this.

Meantime, Joyce pointed to the evolutionary biology research application of studying the evolution of a self-replicating ribozyme. “If you had an RNA enzyme that was an RNA replicase that could copy RNAs exponentially, including copies of itself, then I would say it’s alive,” said Joyce . “Then it’s up to evolution. Whatever makes it better makes it better.”