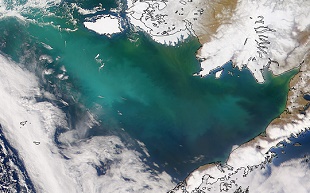 NASA EARTH OBSERVATORYSingle-celled algae that grow into transient, miles-wide expanses are prominent players in oceanic food webs. But tinier organisms—viruses lethal to these algae— can take down massive algal blooms just as quickly, according to results published today (August 21) in Current Biology.

Marine algal blooms have complex life cycles; sunlight and wind are as crucial to their growth as nutrients and the presence of predators, like zooplankton. Although researchers have previously studied the factors that cause blooms to begin, the physical and biological factors that cause their death were not as clear. Cloud physicist Ilan Koren and marine microbiologist Assaf Vardi, both of the Weizmann Institute of Science in Israel, teamed up with their colleagues to address the question.

The team combined satellite data with in situ measurements of water samples taken during a month-long summer 2012 cruise in the North Atlantic to quantify the growth,...

The oceanic patch, identified from satellite data based on its high chlorophyll concentration, was embedded within a well-stratified column of water that didn’t mix much with its surroundings. Over a 25-day life cycle, the patch began with a fast growth phase, increasing its chlorophyll concentration four-fold in just 17 days. Approximately eight days after reaching its peak, contrasting chlorophyll faded into the background, indicating the bloom’s demise.

Because the patch was physically isolated in a stable column of water, it was unlikely that the fading was caused by water mixing due to currents. Nutrients such as nitrogen and phosphorus remained at fairly constant levels throughout to bloom’s life cycle, indicating they were also unlikely reasons for the patch’s fading. When the team quantitated the DNA of E. huxleyi virus (EhV), a virus specific to this species of algae, they found approximately 200 to 800 virus particles per cell (a burst size similar to what’s seen in laboratory cultures), suggesting the viral burst was responsible for algal death.

“There aren’t many datasets like this,” said marine chemist Ken Johnson of the Monterey Bay Aquarium Research Institute in California who was not involved with the work. “The role of viruses as a bloom ending agent has been hypothesized for a long time, but there hasn’t been much data. Part of the reason is that it’s hard to get on a ship and go out and know when a bloom is going to end.”

The researchers also estimated that this particular algal bloom produced approximately 24,000 tons of organic carbon—about the same as that produced by an equal-sized patch of rainforest—turning two-thirds of this amount over in the course of a week.

This massive carbon turnover could have critical implications for the life and chemistry of oceans. Although the fate of this particular biomass is unclear, some of it may be consumed by other marine life or fall to the ocean floor as sugars and lipids. The algal species that created this bloom is a coccolithophore, which forms a hard shell of chalky calcium carbonate. Over geological time scales, deposits of coccolithophores can also lead to the formation of structures like the white cliffs of Dover, according to marine microbiologist Willie Wilson of Plymouth Marine Laboratory in the U.K.

“Viruses play a critical role—they’re great engines of planetary control,” said Wilson, who was not involved with this work. “Whatever ecosystem you’re in, you need some kind of a loss process. [Without that,] you can’t get recycling of life.”

Classical mechanisms proposed for the death of algal blooms have been either “bottom-up” factors. such as lack of nutrients, or “top-down” factors, like algae being grazed upon by zooplankton.

“Viruses are a relatively new [discovery] as a big actor in this process,” said Vardi. “This is really the beginning of understanding the times, rates, and spatial scales at which viruses cause the demise of a bloom.”

Koren added that algal blooms are like “floating labs,” which provide researchers with “an opportunity to study ocean dynamics in a way we could not earlier.”

“In some respects, they were lucky that they managed to find an absolutely fabulous biological feature in this bloom,” said Wilson. “It’s nice to follow the progression of the bloom and see fairly conclusively that viruses caused the demise of it.”