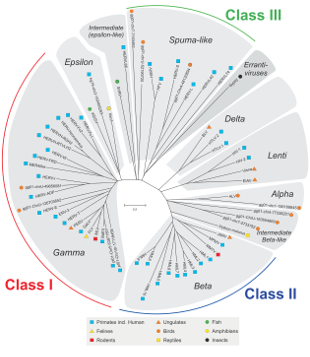 Dendrogram of various classes of endogenous retrovirusesWIKIMEDIA, FGRAMMENRemnants of retroviruses that entered the human genome millions of years ago can regulate some innate immune responses. These viral sequences have previously been linked to controlling early mammalian development and formation of the placenta, among other things. A study published today (March 3) in Science establishes that one such endogenous retrovirus in human cells can also regulate the interferon response, which helps organisms quickly respond to infections. The work is one of the first reports to show that human cells could have adopted retroviral sequences to regulate their genes.

“Before we started this project . . . we knew our genomes were full of these elements and many of them are activated during normal development in cells,” said study coauthor Edward Chuong, a postdoc at the University of Utah in Salt Lake City. “Our motivation was: How can we...

Chuong and his University of Utah mentors Nels Elde and Cédric Feschotte began by scanning the sequences around interferon-induced genes, finding at least 27 transposable elements that likely originated from the long repeats at the ends of retroviral sequences. One such element, known as MER41, comes from a virus that invaded the genome approximately 45 million to 60 million years ago; the team found that its sequence in present-day human cells contained interferon-inducible binding sites.

The group then focused on a MER41 sequence that occurs 220 base pairs upstream of an interferon-induced gene called AIM2, which activates an inflammatory response in cells. When the researchers deleted this MER41 element in a cell line using CRISPR/Cas9 gene editing, interferon treatment could not trigger the AIM2 gene. Without the interferon-mediated response, these cells were more susceptible to viral infections, the team found.

“This is a really strong paper,” said Dixie Mager of the University of British Columbia who was not involved with the study. Although previous studies have considered the regulatory functions of endogenous retroviruses, most have been genome-wide correlations, Mager added. “[Here] they go in and delete the specific endogenous retroviruses and show an effect. That’s one of the things that sets this study apart.”

In addition to AIM2, the group found MER41 elements helped regulate at least three other interferon-inducible genes involved in human immunity. Looking across the genomes of other mammals, the researchers also found MER41-like regulatory elements in lemurs, bats, and other species.

The work is “simple and elegant,” said Todd Macfarlan of the Eunice Kennedy Shriver National Institute of Child Health and Human Development who was not involved with the study. “The novelty here is that it extends this idea that retroviruses are continually being coopted for things—not just for placental or early development, but also for other types of gene regulatory pathways. In the future the question might be: Are there any pathways where retroviruses don’t play a role?”

Whether host cells coopted the viral sequences for their regulatory needs or if ancient viruses used their regulatory abilities to control host immunity during invasion is still unknown, according to Feschotte. “We can only speculate why ancient viruses might have carried these regulatory switches to begin with, but data suggest they had these systems built into their sequence already,” he told The Scientist.

Endogenous retroviral elements make up about 8 percent of the human genome, and similar regulatory effects might be found on other mammalian gene functions, said Mager. “What’s cool about endogenous retroviruses is that their ends, known as LTRs, are optimized to have all these regulatory sequences in just 300 to 400 base pairs of DNA,” she said. “These units are powerhouses of regulatory potential.”

Future studies are needed to establish that these regulatory mechanisms are functional in animals, said Macfarlan. In subsequent work, Feschotte and his colleagues aim to extend their studies to a mouse model and immune cell lines.

To Feschotte’s mind, understanding how these sequences regulate human genes could shed light on previously unknown mechanisms of many diseases. While studies of cancer, autoimmune diseases, and other conditions have reported that endogenous retroviruses are reactivated in disease, the reasons for reactivation— and its consequences—are still unclear.

“What has plagued this field is that we don’t the consequences or molecular mechanisms by which these endogenous retroviruses contribute to disease,” he said.