A new virtual reality system allows researchers to control what a freely moving fly sees and study how it responds to its environment. (See full video.)STRAWLAB.ORG/FREEMOVRFlies, fish, and mice can now enter virtual reality (VR) without being tied down. European researchers have developed a set-up for freely moving animals that may offer more detailed insight into how animals’ brains work in social situations. They describe the system today (August 21) in Nature Methods.

“The fundamental challenge with experiments on social behavior is that it is difficult to control interactions between real animals,” Andrew Straw of the University of Freiburg in Germany tells The Scientist by email. “With virtual reality in unrestrained animals, the interaction can be with one or more ‘animals,’ which are in fact images controlled precisely by a computer program.” 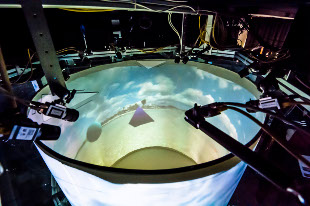 IMP/IMBA GRAPHICS DEPARTMENT, STRAWLAB.ORG/FREEMOVR“The visual VR we developed allows us to perform highly controlled visual experiments while the locomotor control system is operating completely normally,” Straw says. “This is particularly important for studies on spatial cognition, where it is clear that animals use external sensory cues when available, such as visible landmarks, and internal cues, such as distance walked.”

Called FreemoVR, the new VR system allows scientists to perform precise experiments that investigate how such sensory cues are integrated in the brain, Straw says. To create the new set-up, Straw and colleagues tracked animals in three-dimensional space while using video-game technology to display an artificial environment. To maintain the relevant viewpoint as the animal moved around in the space, the team carefully calibrated the 3-D shape of the walls and how each patch of wall was illuminated by each projector pixel.

The team tested the virtual worlds on freely moving fruit flies, zebrafish, and mice. The virtual worlds allowed the team to study mice’s aversion to heights and how zebrafish respond to being swarmed by invaders. The results also show that restrained fly preparations are not suitable for studying the role of head movements in flight control.

Researchers track a fish in a virtual-reality system as it responds to projections of other fish of the same species. (See full video.)STRAWLAB.ORG/FREEMOVR“To unravel the mysteries of how the brain processes sensory information and directs behavior, ideally we would study activity in the brain during its most natural state,” Gwyneth Card, who studies fruit-fly decision making at the Howard Hughes Medical Institute’s Janelia Research Campus in Virginia, tells The Scientist by email. “FreemoVR clearly gives the experimenter the power to put virtual objects in a fly’s environment, such as a post, which the animal will react to as if they are real.”

Card says that with systems like FreemoVR, researchers could change the visual stimuli a fly experiences in real time according to the animal’s behavior.  This could help dissect how the fly uses visual information to make behavioral choices.

The new system “does a very nice job of implementing freely moving VR,” agrees Albert Lee, also of Janelia, by email. He studies spatial learning in rats and says that the team’s experiment on mice shows the system can effectively simulate 3-D environmental structure from the animal’s point of view.

In the experiment, the team tested how mice respond to seeing different floor depths by having the animals walk on a circular track elevated above a checkerboard surface. Mice can sense height by using the relative movement of objects to determine their distance, so checks of the same size move differently if they are farther away. The team created a “static” set-up by placing a television under the circular track. The squares were projected so that the checks didn’t move correctly to reveal a difference in distance. The team then created a VR set-up by changing the projection of the squares so that they moved to give the perspective of being at different heights. While in the static set-up, the animals spent equal amounts of time above different areas of the floor, in both the real world and VR system, the mice spent more time above the flooring that wasn’t as far away. “The animal reacts by showing a real-world-like ‘fear of heights,’” Lee says.

Mice have an aversion to heights and spend most of their time over shallow depths in both real-world and virtual-reality conditions, a new study shows.IMP/IMBA GRAPHICS DEPARTMENT, STRAWLAB.ORG/FREEMOVRStraw says he and colleagues see the application of the VR system in future mouse neurobiology work, particularly within the pharmaceutical industry. “A typical problem when testing anti-anxiety drugs is that dosage can be very critical. If given too high a dose, the animal may not move due to lethargy, making it impossible to test the effect on anxiety related behaviors,” Straw says. “Our hope is that with VR we could better distinguish between lethargy and anxiolytic effects and improve the efficiency and efficacy of drug testing protocols.”