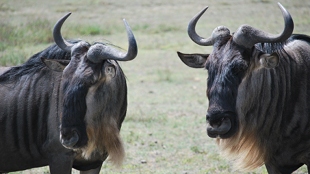 WildebeestsWIKIMEDIA, CHAD ROSENTHALA single gene, which enables herpesvirus genomes to persist in infected cells, appears to be critical for the development of an often-fatal disease in susceptible animals, according to new research published today (April 29) in The Proceedings of the National Academy of Sciences.

Cattle can contract malignant catarrhal fever (MCF), an often-fatal disease in which activated immune cells accumulate and cause tissue damage, from wildebeests asymptomatically infected with the alcelaphine herpesvirus 1 (AlHV-1). Now, researchers demonstrated that MCF requires the persistence of the herpesvirus genome in infected cows. Removing the gene responsible for AlHV-1 latency helps protect the animals against the disease, pointing to a new vaccine strategy to protect livestock.

The new research offers “compelling evidence” that a herpesvirus gene enables the viral genome to be maintained and is “important to the accumulation of infected T cells and generation of disease,” said David Haig,...

AlHV-1 is one of several types of herpesviruses that do not cause disease in their natural hosts, but can infect and kill other animals, like cattle. Most wildebeests harbor AlHV-1 and young wildebeest shed the virus in their nasal secretions, and can pass the infection to cattle, which often succumb to MCF within days or weeks.

Like all herpesviruses, AlHV-1 can either replicate in infected cells to produce more viruses, or enable its genome to persist in a dormant, or latent, state. Most herpesviruses cause disease when replicating inside cells, but previous work had failed to find infectious viral particles in MCF-affected animals, explained Benjamin Dewals, a veterinary immunologist at the University of Liège in Belgium, who led the research.

Whether AlHV-1 needs to persist to cause MCF, or can initiate a snow-balling immune reaction, has been a “big debate,” said Mathias Ackermann, a virologist at the University of Zurich in Switzerland, who did not participate in the research.

In order to determine if MCF is associated with latent virus, Dewals and his colleagues looked at viral genes expressed in lymph node tissue from calves suffering from MCF. Though they found no virus gene transcripts essential to viral replication, the researchers found that ORF73, which encodes a protein critical to maintaining latency, was expressed in 20 percent of the activated T cells that accumulated in MCF lesions, and experiments detecting the AlHV-1 genome showed that 40 to 70 percent of lymph node T cells carried it.

Furthermore, when the researchers infected rabbits—an MCF model organism—with ORF73-knockout strains of AlHV-1, the animals exhibited none of the hallmarks of MCF. Interestingly, rabbits that had been inoculated with the knockout virus did not develop MCF upon infection with wild type AlHV-1, suggesting a possible vaccine strategy.

The findings may have applicability to related viruses as well, said Hong Li, a microbiologist at the Agricultural Research Service of the United States Department of Agriculture, who studies ovine herpesvirus 2 (OvHV-2), which causes MCF in bison. Unlike AlHV-1, OvHV-2 cannot be grown in culture, but Li suspects that an ORF73-deficient AlHV-1 virus could be used as a backbone to build a vaccine against OvHV-2.

It’s not yet clear why latency is critical to MCF, but the researchers have identified many new AlHV-1 gene transcripts whose function need to be determined, Haig said. In addition, though the evidence supports a central role of latency in inducing MCF, some small amount of viral production is also likely to be important in disease progression, he added.

MCF most likely results from a complex interaction between the cattle immune system and AlHV-1, agreed George Russell, a molecular biologist at the Moredun Research Institute in Scotland who did not participate in the study. Mere genome persistence, as in the case of classic latency, isn’t enough to cause disease. “In my personal opinion, it’s latency plus,” he said.

L. Palmeira et al., “An essential role for g-herpesvirus latency-associated nuclear antigen homolog in an acute lymphoproliferative disease of cattle,” The Proceedings of the National Academy of Sciences, doi: 10.1073/pnas.1216531110, 2013.