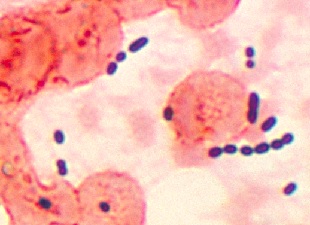 “They showed not only that this [norovirus] is protective against VRE—which is a very serious, hospital-acquired pathogen—but that they could also mimic the effect of the virus using a drug,” said Kenneth Cadwell, an assistant professor of microbiology at New York University’s Skirball Institute of Biomolecular Medicine, who was not...

The microbiota of the intestine normally provide indirect resistance to colonization by VRE and other pathogens by triggering the host immune system to produce antimicrobial proteins. But when the host community is depleted by antibiotics, VRE is free to proliferate, and can cause potentially life-threatening, difficult-to-treat infections.

Inspired by recent research in mice demonstrating that murine norovirus can enhance antibacterial defenses in the intestine, the team tested whether inoculations of norovirus could reduce VRE densities in antibiotic-treated mice. The researchers found that in cases where inoculations led to infection, the norovirus induced elevated expression of a gene coding for Toll-like receptor 7 (TLR7)—a protein involved in both antiviral and antibacterial immune pathways. In these cases, the mice began synthesizing antimicrobial peptides in the intestine, and regained partial resistance to VRE colonization.

But inoculations did not reliably lead to infection, said study coauthor Michael Abt, a research fellow in Eric Pamer’s lab at Memorial Sloan Kettering—possibly because a host’s commensal gut bacteria facilitate the establishment of the virus. “If you use antibiotics that get rid of the [commensal] bacteria, you can’t use the virus to infect the host,” he told The Scientist. “We needed to find a way to get around that.”

So the researchers turned to a synthetic ligand called Resiquimod (R848), which mimics virus-derived, single-stranded RNA molecules, and binds directly to TLR7. They found that, in contrast with murine norovirus, R848 administered orally to mice could reliably and significantly reduce VRE densities in the gut, despite treatment with antibiotics.

The team went on to show that R848 triggers a TLR7 pathway that induces expression of two cytokines—interleukins 23 and 22 (IL-23 and IL-22). In the intestinal epithelium, these cytokines in turn induce the synthesis of an antimicrobial peptide called Reg3γ—and an associated resistance to VRE colonization in the gut of antibiotic-treated mice.

The findings may have important clinical implications, and suggest that triggering the IL-22 pathway using this or similar ligands might be a potential treatment for VRE in patients receiving antibiotics, said Cadwell. However, he added that further work would be necessary to establish whether other pathways are also involved. “The question is: Can you just use interleukin-22?” he said, “Or is that not sufficient?”

David Wang, an associate professor at Washington University School of Medicine in St. Louis noted that in their paper, the researchers also acknowledged potentially harmful effects of stimulating TLR7—which has a broad effect on immune system function beyond antimicrobial peptide synthesis. “We don’t know what the long-term impacts of activating the TLR7 pathway are,” Wang said. “While this is very promising, there needs to be a lot more work to determine what other consequences there might be aside from limiting VRE.”

To that end, said Abt, an important next step will be to separate the induction of IL-22—and its downstream effects—from “a slew of pro-inflammatory cytokines” that are also induced by TLR7.

“It's going to take a lot more research before it can get us to an actual therapeutic,” he said. “The encouraging thing is that, instead of using a whole commensal bacterium or a whole virus to stimulate the immune system, we’re starting now to get to specific ligands that target specific pathways.”