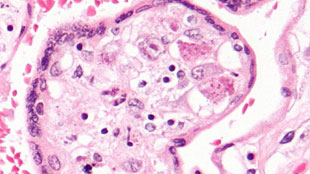 HCMV-infected cellWikipedia, NephronHuman cells have several pathways for repairing damage to DNA, but those infected by human cytomegalovirus (HCMV) have no such recourse. Researchers at the University of Idaho have found that this virus can monopolize its host’s repair proteins, so they exclusively fix damage to the virus’s genome but not the host’s.

“If the virus co-opts the repair machinery for its own good, a cell's normal capacity to repair itself might be disabled,” said Lee Fortunato from the University of Idaho, who led the new study, published today (29 November) in PLOS Pathogens. And that’s exactly what she and her colleagues found.

HCMV can itself damage host DNA, breaking both strands of the double helix at specific points. Although the cell responds by mobilizing repair proteins, most of these repairs are never finished.

This is partly because, as Fortunato showed in earlier studies, HCMV impounds some repair...

To test that idea, Fortunato’s team exposed infected skin cells to ultraviolet (UV) radiation to inflict DNA damage. Specifically, UV radiation is known to fuse adjacent thymine bases together into dimers, which are then cut out and replaced through a pathway called nucleotide excision repair (NER). Using antibodies that recognize the fused bases, the team showed that they had disappeared from the viral replication centers after a day, but still remained in the rest of the cell’s nucleus, where host DNA resides.

The researchers also DNA from infected cells through gel electrophoresis, to separate large fully-repaired pieces from smaller unrepaired fragments. They treated the gels with fluorescent molecules that recognise viral DNA and host DNA, and glow in different colours. Sure enough, viral DNA was efficiently repaired, but host DNA was not.

“Our study is the only one to date that has looked separately at the viral and host genomes,” said Fortunato. “If we had just looked at the entire DNA of these cells, we would have concluded that NER was decreased in HCMV infected cells—true for the host genome, but not for the viral one.”

“[The finding] suggests that the viral genome is perhaps more accessible to being repaired,” said Matt Weitzman, a virologist from the University of Pennsylvania, who was not involved in the study. However, he added, “the mechanism through which this happens still need to be addressed.” Fortunato suspects that viral proteins could interact with the host’s repair proteins and actively shuttle them into the replication centers. “My hope is that we might be able to find the viral proteins responsible for sequestering the repair machinery in the infected cells,” Fortunato said. Developing drugs that block these proteins might allow infected cells to repair their genome more efficiently, which could be useful for people with suppressed immune systems.

Regardless of the mechanism, the results might help to explain one of the more severe consequences of HCMV infection—birth defects. Although most US adults have been infected by HCMV at some point in their lives, they usually suffer little more than a mild cold, unless they have weakened immune systems. But if the virus infects a pregnant woman, it can cross the placenta into the fetus. Around 1 percent of fetuses are infected in this way, and between 10 and 25 percent of them develop neurological problems, such as small heads (microcephaly) and problems with hearing and vision.

Fortunato suspects that HCMV’s ability to damage DNA, while preventing cells from repairing it, might be involved in these birth defects. Damaged fetal cells that are not killed by the virus “might not function properly in a developing brain, migrate to [their] correct position, or interact properly with neighboring cells,” she said. Since a fetus only has a small number of cells, problems in any one of them may have serious consequences.