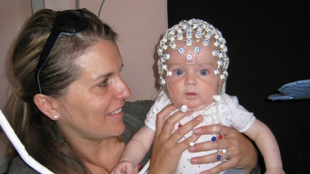 SOFIE GELSKOVThe distinctive brain activity pattern associated with visual consciousness in adults is present in babies as young as 5 months old, according to a study published last week (April 18) in Science. The authors claim their findings represent the first scientific evidence that babies are perceptually conscious.

“It’s a very nice study,” said Victor Lamme, a cognitive neuroscientist at the University of Amsterdam who studies visual consciousness. “If it’s all correct, it tells you not only that children of these ages can see a face, as we know they can from the first day, but that they have some sense of knowing that they see a face.”

The findings could have implications for our understanding of learning and memory in babies, researchers said. And if this neural marker for perceptual consciousness stands up, it could be used to assess consciousness in vegetative-state patients—and even animals. “This...

Although babies do things that suggest they are visually conscious, such as orienting their gaze toward faces, these behaviors may represent unconscious reflex actions rather than conscious perception. It has been impossible to prove one way or the other, because babies cannot report conscious responses to stimuli.

To overcome that problem, cognitive neuroscientist Sid Kouider of the École Normale Supérieure in Paris, France, and colleagues looked in the brains of infants for the distinctive patterns of electrical activity observed in adults at the exact moment they report consciously registering an image of a face.

Previous studies have shown that the perception of a fleetingly presented face follows a two-stage process in the brain, each with clear electrophysiological signatures. When you first see a face, even subliminally, the sensory cortex is activated. But if the face is glimpsed for longer than 50 milliseconds—the perceptual threshold in adults—a signal is sent to the prefrontal cortex, which feeds back to the sensory cortex to maintain the image. “There is a re-activation of the sensory cortex,” said Kouider. This re-activation, known as the “late slow wave” (LSW), correlates with conscious perception in adults.

To see if this same neurophysiological signature is present in infants, Kouider and his team used EEG to record electrical activity in the brains of 80 babies in three different age groups—5, 12, and 15 months—as they saw a picture of a human face fleetingly flashed on a screen for between 17 and 100 milliseconds.

The researchers saw the LSW in babies in all three age groups, though the activity was weaker and arrived more slowly than in adults. In 12- and 15-month-old infants, the activity came on around 750 milliseconds after the image was flashed up, roughly 3 times slower than in adults. The LSW was also observed in the 5-month-old babies, though it was even weaker and arrived even later—roughly 900 milliseconds after the image.

“We believe that the neural system underlying conscious access exists [at 5 months], but it’s really far from being fully functional,” said Kouider. “There is then a slow acceleration of this process during development.” This is probably because the prefrontal cortex develops significantly around 12 months, Kouider speculated, including a dramatic increase in myelination, which is crucial for speeding up action potentials and enabling efficient cross-brain communication.

“This is an excellent piece of work on a very challenging topic and population,” said Teodora Gliga of the Center for Brain and Cognitive Development at Birkbeck, University of London. “The authors themselves acknowledge that their findings do not speak to the subjective experience of being aware of seeing a face, but one cannot get closer to investigating this issue in a population that cannot talk, and is not particularly good at pressing buttons either.”

Michelle de Haan of the Center for Developmental Cognitive Neuroscience at University College London agreed. “Just because the signal in the brain exists, does not mean babies notice it or use it in the same way as adults,” she said.

Nevertheless, both de Haan and Gilga said that a neural marker for perceptual consciousness could help researchers investigate the nature of memory and learning in babies. “Understanding to what extent information is processed, [and] whether it is processed at all, will help us manipulate the environment so that certain stimulation is not perceived—we prefer infants don't feel pain during medical interventions—while other information is more fully processed, to enhance learning,” said Gilga.

The work could also help doctors monitor consciousness in non-communicative brain-damaged patients, added Lamme. “Whether this a real objective marker is still up for discussion,” he said, “but it’s one of the best markers around, so it’s an exciting way to study consciousness in beings that can’t communicate.”