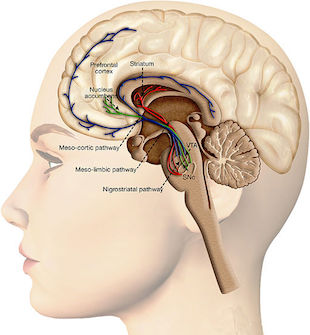 The brain's reward systemWIKIMEDIA, OSCAR ARIAS-CARRION ET AL.In order to work well together, people must understand what others are thinking and feeling. New research suggests that we are attracted to those whose emotions we feel we can easily understand. And our confidence in that emotional understanding is reflected in the brain’s reward system, according to a study led by Silke Anders of the University of Lübeck, Germany, and colleagues, which was published today (April 4) in PNAS.

“This is fascinating, because it indicates that one of the reasons we find someone attractive could be related to our ability to put ourselves into their shoes,” Martin Hebart, a neuroscientist at the US National Institute of Mental Health who has collaborated with some of the study’s authors but was not involved in the research, wrote in an email.

But that doesn’t mean the opposite is true. “Just because...

Previous studies have shown that encountering someone we find attractive activates our brain’s reward system. But until now, most of the research has focused on physical attraction—neglecting the role of social interaction.

The researchers found evidence to suggest that a person’s ability to understand another’s emotions may reflect the amount of overlap between what they call the “neural vocabulary” of the two individuals—the common emotional language they share. “If there is a large overlap between the sender’s and the perceiver’s ‘neural vocabulary,’ then the perceiver should be able to decode the sender’s signals more easily than in cases where there is less overlap,” Anders explained.

To investigate this hypothesis, Anders and her colleagues performed two experiments. In the first experiment, 21 women and 19 men were shown videos of six different women acting either fearful or sad. The volunteers then had to identify which of these two emotions the subject was expressing, and how confident they were in their assessment.

Immediately before and after each video trial, the participants were instructed to enlarge a picture of the woman in the video until it resembled a comfortable distance for conversation—an indicator of how approachable they found her. The participants were also asked how much they agreed with several statements about the woman in each video, including: “I would like to meet her in real life,” “I feel that she would understand me,” and, “I think I could discuss personal problems with her.”

The second experiment, which involved 28 women and 24 men, was similar to the first, except that the participants’ brain activity was measured using functional magnetic resonance imaging (fMRI) while they were watching the women in the videos express emotion. In addition, the observers were later instructed, like the women in the videos, to try to experience and show fear and sadness themselves.

The volunteers in both experiments were able to accurately identify the emotions expressed by the women in the majority of the videos. The more confident the study participants indicated they were in understanding the emotion of the subject in the video, the more attractive they found her, as signaled by how much they resized the image of her and how they responded to the questions about her.

And this confidence in their emotional comprehension showed up in their brain activity. Changes in attraction between observers were linked to activation of the ventral striatum and medial orbitofrontal cortex (mOFC)—part of the brain’s reward circuitry. These responses were specific to pairs of observers and subjects: in other words, they weren’t merely a result of how generally attractive or expressive the women in the videos were.

In addition, similarity between neural activity recorded while the participants were watching the women experience an emotion and that due to experiencing the emotion him or herself was also tied to greater activity in the mOFC, the researchers reported.

The findings “might relate more generally to a well established literature suggesting that we are attracted to others not just by virtue of their physical attractiveness, but also by the extent to which we perceive similarities between ourselves and that other person,” psychologist John O’Doherty, the director of the Caltech Brain Imaging Center who was not involved in the work, told The Scientist in an email.

But the study has some notable limitations, according to Michael Spezio, a neuroscientist at Scripps College who also was not involved with the research. For one, the study “is primarily not about interpersonal attraction, but about willingness to approach a person,” and did not control for the role of physical attraction, Spezio wrote in an email.

“Second, the paper refers to a single reward system in the brain.,” he added. “Yet the study did not directly measure this for the participants involved.”

The research was intentionally limited to investigating the response to emotions expressed by women only. (Previous studies have suggested women express emotions more accurately than men, the researchers noted.)

Additionally, while the researchers made every attempt to elicit emotions that were as natural as possible, the emotions were somewhat artificial. “This is still not natural communication, and we are certainly still missing some aspects future studies will reveal,” Anders said.

It remains an open question whether the brain signals represent only a reward for reading someone’s emotions, or true learning—which would suggest that we can improve our emotional understanding by interacting with someone. “This is a question we are currently investigating,” Anders added.

Clarifications (April 5): The subheading and second sentence of this article have been updated to include “they feel,” and “we feel,” respectively.