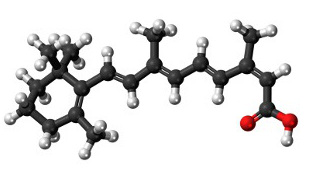 Retinoic acidWIKIMEDIA, JYNTOMaternal vitamin A can significantly impact the development of the fetal immune system, according to a mouse study published today (March 19) in Nature.

Researchers have shown that the offspring of pregnant mice raised on a low-vitamin A diet developed smaller lymph nodes than did animals exposed to higher levels of the nutrient in utero. The vitamin-deprived mice also had fewer Peyer’s patches, lymph node-like structures in the intestine. The same was true for murine embryos genetically engineered to have defective receptors for the vitamin A metabolite retinoic acid. After birth, a normal diet did not reverse the effects of the in-utero deficiency, which seemed to hinder mice in fighting infections even as adults.

“What we found is that there is a tight link between the maternal diet during pregnancy and the immune fitness of the offspring,” said Henrique Veiga-Fernandes, who led the study....

“Vitamin A has been shown to have many effects in the developing fetus. Vitamin A is involved in many developmental processes: it’s involved, of course, in vision, development of the eyes [and] retina, and after birth, it has been shown [to have] effects on the immune system,” said Gérard Eberl, of the Pasteur Institute in Paris, who wrote an editorial accompanying the study but was not involved in the work. “This paper is new because it shows that vitamin A provided by the mother to the fetus has an effect on the development of the immune system, and that is really significant.”

“This is the first demonstration that any dietary maneuver during pregnancy can impact lifelong immune function of the offspring,” wrote David Chaplin, who studies the development of lymphoid organs at the University of Alabama at Birmingham but was not involved in the work, in an e-mail to The Scientist.

Previous research on the development of the secondary lymphoid organs—which, beyond lymph nodes and Peyer’s patches, include the spleen—found that the process was strictly programmed. The present study is the first to suggest that this development can be altered by maternal behavior.

Beyond lymph node size, the researchers sought to examine other ways vitamin A might affect the developing immune system. During immune system development, lymphoid tissue inducer cells with the marker CD4 (LTi4) are important for the formation of lymph nodes and other secondary lymphoid organs. These cells are distinct from another type of innate lymphoid cell, which lacks CD4 (ILC4neg).

Having established that a normal diet after birth did not reverse the effects of vitamin A deprivation in utero, the researchers wondered whether a bone marrow transplant might achieve this effect. The researchers took the offspring with the retinoic acid receptor mutations and transplanted them with hematopoietic stem cells from wild-type mice. The transplant did not reverse the effects of the vitamin A deficiency. Even with the transplanted stem cells, the offspring that were exposed to low vitamin A in utero had smaller lymph nodes and, as adults, fought a viral lung infection less effectively than controls—wild-type mice transplanted with the same stem cells.

“We always used to think of this as sort of a binary process—either you develop lymph nodes or you don’t,” said Cupedo. “Now this really shows that there are intermediates and that you can have size issues that really affect how the immunity to infection in later life occurs.”