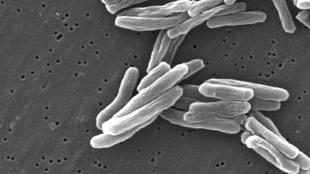 Scanning electron micrograph of Mycobacterium tuberculosisWIKIMEDIA, CDC/JANICE CARRHigh doses of vitamin C can rapidly wipe out entire populations of drug-resistant strains of the bacteria that cause tuberculosis (TB) by inducing a chemical reaction that produces high levels of DNA-damaging oxidative radicals, according to a study published today (May 21) in Nature Communications.

The study was done on Mycobacterium tuberculosis in lab cultures, but if the results hold up in vivo, it raises the possibility that vitamin C could be added to existing TB drugs to speed up treatment. Moreover, by elucidating the mechanism by which vitamin C kills M. tuberculosis, the work suggests a promising route for the development of new TB drugs to tackle these hard-to-kill bacteria.

“[The research] shows that perhaps M. tuberculosis doesn’t have quite the iron-clad armor that we often associate with it; that is does perhaps have some Achilles heels and...

But Bishai warned that it will be difficult to achieve the high concentrations of vitamin C required in humans, and added that “there is still a little bit more proof of principle needed” before large-scale drug discovery efforts centered around this mechanism can begin. “I think the question would be, can we identify a more potent reductant that would be delivered at lower concentrations but still stimulate the oxidative radicals?"

“We’re not saying vitamin C is the cure for TB,” said Catherine Vilcheze of the Albert Einstein Medical College at Yeshiva University in New York, who was first author on the study. “But we should look at trying to find ways to mimic the way it kills TB bacteria [in vitro], because it is very, very effective.”

The initial discovery of vitamin C’s TB-killing ability came about by accident. To test their hypothesis that the amino acid cysteine helps the TB drug isoniazid (INH) kill off M. tuberculosis by acting as a reductant to produce oxidative radicals, Vilcheze and colleagues decided to see if vitamin C, another reducing agent, would have the same effect. It did. But the researchers were shocked to see that vitamin C alone, used as a control, also wiped out the bacteria. “I was not expecting any effect at all, so that was very surprising,” Vilcheze said.

The researchers then demonstrated that at a certain concentration, vitamin C could sterilize cultures within just a few weeks. It had the same effect on drug resistant strains and extensively-drug-resistant strains. “If you start with about 10 million cells, after 3 weeks [of vitamin C treatment] there is nothing left in your culture,” said Vilcheze. “It kills everything.” Concentrations had to be much higher to achieve that same effect in other pathogens, however, so M. tuberculosis is uniquely susceptible.

The team hypothesized that vitamin C killed the bacteria by driving an iron-dependent reaction that produces reactive oxygen species (ROS), which can induce cell death via DNA damage. Sure enough, when added to the bacteria in an environment that lacked oxygen or was depleted for iron, the vitamin C lost its sterilization capacity. What’s more, levels of ROS and oxidative damage to DNA and lipids in cell walls and membranes were far higher in cultures treated with vitamin C than controls that were either untreated or treated with vitamin E.

The study also demonstrated that vitamin C’s effect was increased 60-fold in M. tuberculosis strains deficient for mycothiol, which protects the cells from oxidative damage. This suggests that a combination therapy pairing a mycothiol inhibitor with vitamin C, or similar compounds that produce an oxidative burst, could potentially kill the pathogen more quickly than available treatments, said Vilcheze.

And although Bishai cautioned that the high concentrations of vitamin C used in the experiment would be hard to replicate in the human body, he added that it might be possible to develop a more potent but equally well-tolerated reductant to do the same job.

In the meantime, study leader Bill Jacobs, also at Albert Einstein Medical College, wants to carry out clinical trials to see if adding vitamin C supplements to current drug regimens could benefit TB patients. “We don’t know whether vitamin C will work in humans, but we now have a rational basis for doing a clinical trial,” said Jacobs in a press release. “At the very least,” added Jacobs, “this work shows us a new mechanism that we can exploit to attack TB.”