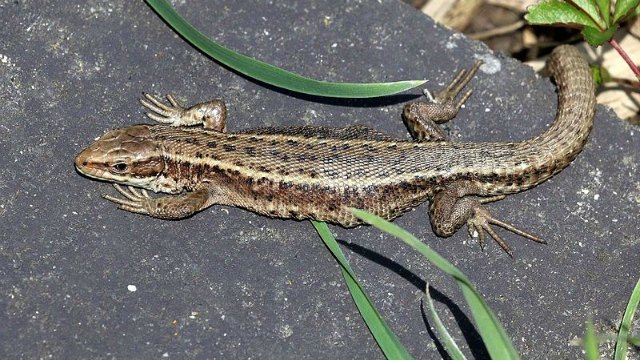 WIKIMEDIA, CHARLESJSHARPAs climate change warms the earth, scientists are beginning to catalog the potential consequences for organisms, from tropical coral reefs to Antarctic penguins. Researchers report today (May 8) in Nature Ecology and Evolution, that bacteria, too, feel the heat. From experiments in a field station in southern France, Elvire Bestion and her colleagues found that warmer temperatures were associated with decreased gut-microbial diversity in the common lizard.

Bestion, a research fellow at the University of Exeter in the U.K., chose increases of 2 °C and 3 °C (3.6 °F and 5.4 °F) because these are the amounts by which the Intergovernmental Panel on Climate Change (IPCC) has predicted temperatures will rise in southern Europe by 2080, she and her coauthors wrote in their study.

Attempting to understand how climate affects the lizard gut microbiome “theoretically is important because we actually don’t have a very good handle...

Lizards are ectotherms, commonly known as “cold-blooded animals,” which means that they do not physiologically regulate their body temperatures the way humans and other endotherms do, Bestion explained. Ectotherms can modulate their temperatures behaviorally, by moving in or out of the sun, but only within limits, she added.

“Environmental temperature is known to be so important to the biology of ectotherms. . . .  Separately, we know that microbes are important to the biology of all animals,” Kevin Kohl, a microbial ecologist and animal physiologist at Vanderbilt University who reviewed the paper for Nature Ecology and Evolution, told The Scientist in an email. “This work does a great job integrating these two ideas and demonstrating the complex interactions that could be taking place out in nature—interactions that could change under patterns of climate change.”

Previous studies have tested the effects of temperature changes on the gut microbiomes of other ectotherms, including tadpoles and insects; both studies reported that temperature increases led to microbiome changes. This is the first such experiment using a vertebrate in a semi-natural setting, Bestion said. The study’s fieldwork took place in Moulis, France, in the Metatron ecology station, a system of 48 100-square-meter enclosures that include vegetation, insects, rocks, and other features typical of the wild, but whose temperatures and other climatological aspects scientists can control.

In a second experiment, during the summer of 2013, the researchers sampled lizards’ cloacal microbes both before and directly after a two-month summer exposure to either current or “warm” temperatures. They found that for both groups, bacterial richness increased during the summer, but it increased less for the lizards at the higher temperatures. “This was mainly driven by extinction of individual bacterial taxa” under the warm conditions, Bestion said.

In a third experiment, the researchers let a subset of the lizards from the first experiment live another year in a common garden setting at present temperatures in order to monitor survival. They found that the lizards that survived the extra year—till May 2014—tended to be the ones that had had richer microbiomes the previous year, regardless of which Metratron enclosure they had come from. “Loss of bacterial taxa might therefore have a negative impact on lizard survival,” the authors wrote in their study.

“As with most microbiome studies, it’s hard to disentangle cause and effect. Drilling down into these functional consequences would be an exciting area to pursue,” Kohl said.

It would be “nice to see some data from wild-caught lizards,” Perkins said. “We don’t know, you know, what types of bacterial communities they typically have, does that change if they’re stressed, does that change over time? It’s a little hard to interpret this.”

Future work on the relationship between climate change and the gut microbiome will extend beyond lizards, Bestion said. “There is clearly a pattern to be investigated, particularly in ectotherms . . . because of the direct link between air temperature in physiology in these animals, but I think even in endotherms, we should maybe think of investigating that to maybe better understand the consequences of climate change.”