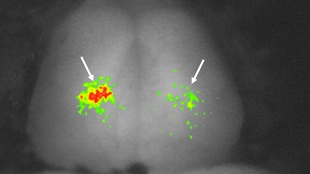 Active neurons in a zebrafish telencephalon.Adapted from AOKI ET AL.The transparent brains of zebrafish, in combination with a fluorescent protein expressed in the brain in response to neural activity, have allowed researchers to catch a glimpse of memory in action. The research, published today (May 16) in Neuron, pinpointed areas of the brain that play a role in storing long-term memories and provide a new tool to study the processes underlying memory formation, storage, and retrieval.

“It’s a wonderful paper,” said Robert Gerlai, a neuroscientist at the University of Toronto who was not involved in the research. The very fact that researchers were able to conclusively prove—in a vertebrate—that specific neuronal activation was due to a memory recall process is “huge,” he added.

Behavioral neuroscientists have struggled to understand the multistep processes involved in learning and memory, Gerlai explained. Evidence directly linking retrieval of a specific...

The transparency of zebrafish brain tissue makes the animals ideal models for studying neuronal activity. In the last decade, researchers have begun to appreciate that fish brains create and store memories in a remarkably similar fashion to mammalian brains, suggesting that genes important in learning and memory in the fish have mammalian homologs performing similar tasks. Another boon for memory research is the fact that during development, fish neural tubes fold outward instead of inward like mammalian brains, so that important areas buried deep in mammalian brains are located at the surface of a fish’s brain, noted Hitoshi Okamoto, a behavioral neuroscientist at Japan’s RIKEN Brain Science Institute.

To study memory processes in more detail, Okamoto and his team trained zebrafish to swim to different sides of a tank in response to different colored lights. They used a transgenic line of zebrafish whose brains express a fluorescent protein bright enough to be detected through the thin layers of tissue surrounding the fish’s cranium. The fluorescence dims in the presence of calcium, which floods neurons about a second after activation. Decreases in fluorescence, visualized using confocal microscopy, signify the brain area being utilized when the fish retrieve their memories in response to the colored lights. The strategy is akin to an fMRI, “except the resolution is way higher”—even down to individual cells, explained Francesco Battaglia, a neuroscientist at the Donders Centre for Neuroscience in The Netherlands, who was not involved in the research.

The zebrafish first learned that a red light heralded an electric shock, which they could escape by swimming to the other side of the tank. At 30 minutes or 24 hours after training, the researchers tested their memory retrieval by immobilizing the fish with a muscle relaxant and showing them a red light. Only in trained fish given a day’s rest before testing did the researchers see an influx of calcium in the telencephalon, a brain region that correlates with the mammalian cortex where long-term memories are stored. The results suggest that the fish were accessing the behavioral memory of swimming away from the anticipated shock.

If the telencephalon was removed a day before the zebrafish were trained, the fish tested 24 hours after training did not remember to swim away from the light. But fish tested just 30 minutes after training still retained their aversion to red light as a short-term memory, and successfully swam away.

The zebrafish “opens up a lot of different avenues for genetic exploration much harder to do in mouse or rat,” said Battaglia. “Now we have model for what happens on a single cell basis that we can manipulate with genetic techniques.”

The current technique is not sensitive enough to identify areas important for memory formation, but Okamoto plans to upgrade his technique to two-photon microscopy. In this strategy, the fluorescent signal scatters less through tissue, allowing detection of smaller calcium changes even deeper inside the brain. This may also allow his team to identify specific sets of neurons involved in guiding particular behaviors, he said.

Gerlai hopes that the new technology will allow researchers to follow the whole time course from memory formation through storage to retrieval. “It’s not trivial,” he acknowledged, “but now we have the tools.”