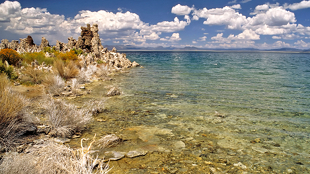 The findings “show how a gatekeeper [protein] keeps arsenate out [of bacteria], so levels don’t accumulate and the bacteria don’t have to worry about toxic effects,” said Ronald Viola, a chemist at the University of Toledo who was not involved in the research.

The study drives a nail in the coffin of a 2010 Science paper in which NASA researchers claimed to have...

The new work provides a mechanistic explanation for how the bacteria in Mono Lake glean enough phosphate from their environment to grow, despite the high levels of arsenate in the water. Phosphate is essential to life, being incorporated into cells’ key energy molecule, adenosine tri-phosphate (ATP), and the DNA backbone. While arsenate is similar in size and structure to phosphate, it is much less stable. As a result, if the enzymes incorporate arsenate into ATP, for example, it will result in a “futile” cycle, explained first author Mikael Elias of the Weizmann Institute of Science in Israel—the cell gets no energy from its efforts because the arsenate-based molecule quickly degrades.

After last year’s controversial study claimed to refute this dogma, Elias and study lead Daniel Tawfik began investigating strategies bacteria use to avoid making this mistake. The researchers turned to phosphate-binding proteins that are part of the transport chain bacteria use to import phosphate from the environment. They cloned phosphate-binding proteins (PBPs) from different species of bacteria, including one from Pseudomonas fluorescens, which are killed by high levels of arsenate, and two from GFAJ-1, the arsenate-tolerate strain from Mono Lake. They then tested the ability of the various PBPs to discriminate between phosphate and arsenate, finding that most had a 500- to 850-higher fold selectivity for phosphate. Even more impressive, GFAJ-1’s PBP-2, which is upregulated in low-phosphate conditions, showed 4,500-fold selectivity for phosphate over arsenate. This extreme selectively presumably allows GFAJ-1 bacteria survive in high-arsenate conditions by binding only phosphate, rare as it may be.

The next step, said Elias, was to figure out how the PBPs distinguish between arsenate and phosphate. Arsenate is only about 4 percent bigger than phosphate by volume, which is one reason some proteins find it difficult to distinguish between the two, Elias explained. X-ray crystallography showed that the PBP from P. fluorescens bound the two molecules with only subtle differences—differences Elias would have missed if his crystallography data hadn’t achieved sub-angstrom resolution. But in the detailed images, the researchers could see that, compared to phosphate, arsenate threw one of the 12 hydrogen bonds in the binding pocket out of alignment.

“In hydrogen bonds, the binding angles are very important,” explained Elias, who added that this strategy for discriminating between ions like arsenate and phosphate is “unprecedented to my knowledge.”

“The differences in the bond angles are really quite small, but for good catalytic activity, we know bond angles need to be exquisitely aligned, and it appears to be the same for binding proteins,” said Ken Scott, a molecular biologist at the University of Auckland in New Zealand who was not involved in the research.

The implications of the research are two-fold, said Elias. First, of course, it complements what’s known about how bacteria resist arsenate toxicity: “If the poison is outside, the first level of resistance is not to take it in.” Second, Elias is excited about the potential for applying this discrimination strategy to synthetic biology, perhaps allowing scientists to avoid side-effects by designing drugs with high binding selectivity to the appropriate targets.

Furthermore, this work, as well as the spate of papers providing contradictory evidence to the initial Science paper on the Mono Lake bacteria, demonstrates that “science is working the way it’s supposed to work,” said Viola. “You have an observation, come up with a hypothesis, and test it.”