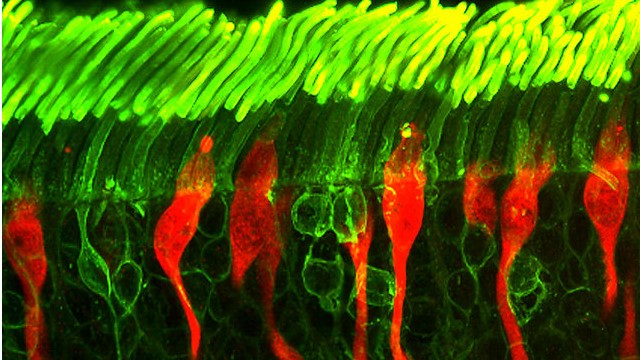 Two types of photoreceptors react to light falling on the retina. Rod cells (green) are usually located around the edge of the retina and function in peripheral vision. Cone cells (red) are concentrated more centrally, and are responsible for high-resolution color vision.FLICKR, NATIONAL EYE INSTITUTEOn August 21, the moon will pass between the Earth and the sun, resulting in a total solar eclipse visible across a large strip of the United States. Self-proclaimed eclipse-chaser Ralph Chou, an emeritus professor of optometry at the University of Waterloo, has been working to spread awareness about eye-safety during eclipses for around 30 years. Last year, he put together the American Astronomical Society’s technical guide to eye safety, aimed at everyone from astronomers to educators to medical professionals.

The Scientist spoke to Chou to find out what happens to the eye when exposed to too much sunlight, and how...

The Scientist: How can too much sunlight damage the eye?

Ralph Chou: Light comes into the eye and goes through all the various layers of cells until it reaches the photoreceptors—essentially, the bottom of a stack of cells. The photoreceptors themselves guide the light towards a specialized structure [of the cells] called the outer segment, where there is a stack of discs that contain the visual pigment. Under normal circumstances, the light would interact with the pigment, which generates an electrical signal that then starts the process of sending an impulse through the optic nerve to the brain.

In looking at the sun, you have a very large volume of photons—light energy—coming in and hitting these pigment discs, and it’s more than they can really handle. In addition to generating the electrical signal, [the cell] also starts generating photo-oxidative compounds. So you’re getting oxidative species like hydroxyl radicals and peroxides that will go on to attack the cell’s organelles.

See “The Eye: An Overview”

If the exposure goes on long enough, there will be enough accumulation of these phototoxic products that the cell will be damaged. If you have enough of this damage accumulated, not only will you get a loss of function of the photoreceptor, but you can, over time, result in that cell being killed. 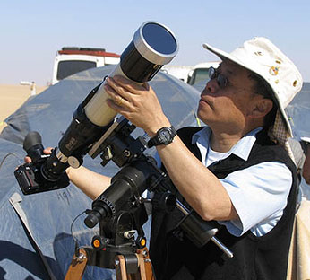 Chou works on equipment to view the 2006 solar eclipse in the Libyan desertTS: Wouldn’t you notice this damage right away?

RC: There’s a latent period between the time you have the exposure to the damaging radiation, and the time the cell starts to fail. We know from experiments on humans and on animals that the latent period is somewhere in the neighborhood of 12 hours, maybe up to 24 hours.

Often people are looking at a solar eclipse at, say, noon, or in the afternoon. For most people, that means that by the time the eyes start to show problems, they’re in bed and asleep. It’s not until the next morning and they wake up that they have the symptoms that will have them coming in to see an eye-care professional.

TS: Presumably a quick glance at the sun isn’t damaging?

RC: There is a threshold exposure level. It’s certainly not something that if you take a quick glance for five or 10 seconds, you’ll do permanent damage to your eye.

One of the problems that we have is that that exposure does not necessarily require you to look at it continuously for the threshold exposure. What we find is that, particularly with short wavelength visible light, repeated exposures over a short period of, say, several hours—and typically an eclipse lasts from first contact to final contact, about three hours—if you make a lot of repeated glances at the sun without protection, you can actually accumulate the exposure to where you go over the threshold.

TS: What kind of symptoms do people with this sort of eye damage have?

RC: The vision that they have right at the center of their visual field when we put up the visual acuity chart is quite bad. Normally, when we look at a person, if they have no vision problems, they will see letters with what we call 20/20. But if they have this kind of damage, often they will present with vision that is, say 20/100, 20/400, sometimes even worse than that.

When we start seeing visual performance at that level, we’re now talking about people who legally are considered vision-impaired or blind. They are unable to see things like street signs. They can’t read even large font sizes. If they look in the mirror, they can’t see their faces, or if they can, it’s extremely blurry.

TS: Is the damage permanent?

RC: Ophthalmologists over the years have tried a number of different ways to try and mitigate the damage early. By and large, those approaches have been to try and use steroids and other anti-inflammatory medications—and it doesn’t work.

Really, the only thing we can do with a lot of these folks is to say, well, we’ll just have to see how your eyes recover. Generally, if there is going to be a recovery, we will see something going on after several weeks, and it will take between three months and a year before we know what the overall outlook is for that individual.

If the photoreceptors survive the photochemical attack, they are able to rebuild their outer segments so they can reassemble the stack of pigment disks. Once the pigment stack is fully regenerated, then the cell is back to normal. We find that happens in probably 50 percent of the patients who present with an eclipse or sun-related retinal injury.

TS: What advice do you have for people watching the eclipse next week?

RC: We have specially designed so-called eclipse glasses that are available to protect the eyes while you are looking at the sun. These are very inexpensive devices containing a filter material which will reduce the amount of visible light passing through them to reach the eye by a couple of hundred thousand times.

There are a variety of types of filter material that can do this. The most popular one that’s out there right now is called black polymer—essentially a plastic substrate containing carbon particles that are very, very fine and are dispersed throughout the material.

These are sold online, and at stores that sell astronomical equipment. A lot of science museums are carrying them, and in the U.S. particularly there are public libraries that will be giving these out free at solar eclipse parts on eclipse day. All you have to do is show up and hope they don’t run out.