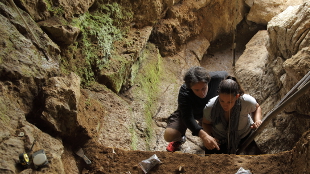 Tom Higham (left) and Katerina Douka selecting samplesUNIVERSITY OF OXFORD, THOMAS HIGHAMNeanderthals overlapped with early modern humans and, based on genetic evidence, even interbred. But the extent of the overlap of the two species both in terms of time and geography is still not fully known, mainly because it has been difficult to accurately date archaeological specimens that go back more than 30,000 years. Using newer techniques, a large-scale dating effort of Neanderthal specimens from Western Europe to Russia now narrows the timing of the extinction of Neanderthals to a span of 2,000 years—between 39,000 and 41,000 years ago. The study is published today (August 20) in Nature.

“The results point to a mosaic pattern of Neanderthal extinction in Europe and provide a shorter time frame for the potential interaction of humans with Neanderthals,” said study author Ron Pinhasi, a professor of archaeology at the...

Tom Higham, an archaeological dating expert at the University of Oxford in the U.K., along with Pinhasi and an international team of colleagues, dated almost 200 Neanderthal bone, charcoal, and tool specimens from 40 archaeological sites across Europe. The results reveal that Neanderthals disappeared from the European continent at various times depending on the region. The findings also provide evidence that Neanderthals and early modern humans coexisted for about 2,600 to 5,400 years.

“According to this study, the overlap of humans and Neanderthals has been refined to a few thousand years, which is quite a long time. Archaeologists can get quite blasé about thousands of years because we deal with millennia and we forget that, in human terms, this is several generations and lot can happen,” said William Davies, an archaeologist who studies the dispersal of human species at the University of Southampton in the U.K., and who wrote an accompanying commentary.

Specimens 50,000 years or older do not contain the radiocarbon needed for radiocarbon dating and even samples as young as 30,000 years old can be prone to contamination from present-day carbon molecules. “Contamination is very significant for specimens of this time period,” said Higham. “A 40,000-year-old sample that has 1 percent modern carbon will give you a date that is 7,000 years younger than the specimen’s real age. It’s difficult to overcome removal of contamination from samples, so there has been a real urgent need to improve dating methods.”

To overcome this hurdle, the team had previously developed new sample prep methods that include the filtering of collagen and isolation of a single mammalian-specific amino acid from bone—both of which allow for more accurate radiocarbon dating.

The samples analyzed included Neanderthal bones as well as tools and other artifacts from two European stone tool cultures, the Mousterian and Châtelperronian, associated with Neanderthals.

“Until recently, the main view was for a coexistence [of Neanderthals and early modern humans] in Europe between about 30,000 to 40,000 years, with a few sites suggesting Neanderthal survived even later than 30,000 years,” Chris Stringer, an anthropologist at London’s Natural History Museum, told The Scientist in an e-mail. “This new work seems to have falsified that model with no signal of a Neanderthal presence after 39,000 to 40,000 years ago.”

The team did not confirm the presence of late-surviving Neanderthals in Southern Iberia, which, based on earlier radiocarbon dating, has been thought to be among the last places where Neanderthals lived. Rather than 32,000 years old, the team dated these specimens at more than 50,000 years of age. “We are rewriting the pre-history of this period,” said Higham. “We found no evidence supporting the survival of late Neanderthals in Iberia, and that is a very significant finding.”

The argument that late Neanderthals did not reside in Iberia—which includes Spain, Portugal, and Gibraltar—will likely raise a few eyebrows, said Davies. “Many in the field have been arguing that Neanderthals stayed much later in Iberia than in France and other parts of Europe. What this [study] tells us is that we really need to test our ideas carefully,” he continued. “The techniques used here are very good, but they may still not have all the answers.”

The Neanderthals also lived in parts of Eastern Europe, Siberia, and Asia. The timing of their disappearance from these regions still remains to be tested. “We need to date these sites to have a really complete picture,” said Stringer.

Higham and colleagues now have funding for five years to do just that—to expand the geographical scope of their findings from Europe further east, and into Asia.

For Davies, determining the chronology of Neanderthals and modern humans will help researchers better understand how ancient peoples lived—their societal structure, what they ate, and what their mating networks were like. “The improvements and developments of various techniques in the last 25 years is allowing us to ask what it was like to be a Neanderthal or an early modern human,” he said. “These are really exciting times.”