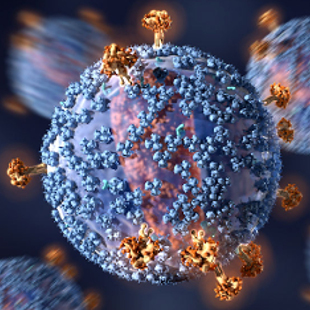 SCIENCE TRANSLATIONAL MEDICINE, C. BICKELThe only HIV vaccine to show promising efficacy in clinical trials stimulated an antibody-based defense in some individuals but not in others. Analyzing patients’ samples from a large trial that took place in Thailand between 2003 and 2005, researchers have now identified a subgroup of study participants who express a human leukocyte antigen (HLA) allele linked to reduced risk of HIV infection after vaccination. The results of this latest analysis were published today (July 15) in Science Translational Medicine.

The highly mutable nature of HIV makes vaccine design particularly challenging. (See “Defeating the Virus,” The Scientist, May 2015.) Individual variation in immune response adds another layer of difficulty. The present study provides additional information on the range of possible immune responses to an HIV vaccine.

“Understanding why [the vaccine] appeared to work in some individuals and may not have worked in...

The US Army-sponsored RV144 trial randomized more than 16,000 people in Thailand at risk for HIV infection to either the vaccine or placebo. The efficacy rate, reported in 2009, was 31.2 percent, yet those who expressed the DPB1*13 HLA allele appeared to be better protected from HIV infection, according to this latest analysis. Individuals with the DPB1*13 variant who also had high levels of immunoglobulin G (IgG) antibodies against a portion of the HIV envelope had the lowest rate of HIV infection following immunization in the trial. The efficacy rate in this subgroup was 71 percent. In other words, those individuals who received the placebo were three times more likely to become infected with HIV compared to those immunized individuals who expressed the apparently protective HLA allele.

“We already knew vaccine recipients that showed a certain type of IgG antibody response against a region of the HIV envelope were less likely to become infected with HIV,” Thomas wrote in an e-mail to The Scientist. “We now see that not everyone who produced this good type of antibody response was protected, but only those who had the DPB1*13 HLA variant.”

Specifically, higher levels of IgG antibodies against a 25 amino acid N-terminus portion of the HIV gp120 protein—encoded by the Env gene—conferred more effective immunity in those with the DPB1*13 allele. This portion of the highly variable protein, part of the virus’s outer envelope, is relatively conserved among the most common substrains of HIV.

Not everyone is so sure that lessons learned from the RV144 trial will advance HIV vaccine strategies. John Moore, who studies HIV-1 Env proteins at Weill Cornell Medical College in New York City is “not convinced that this kind of analysis helps in Env vaccine design.” Moore told The Scientist in an e-mail that he questions how antibodies of interest to the RV144 researchers might interact with Env to impede infection.

Walker, too, noted that immune responses may be specific to this vaccine. “This is one of the frustrations in the field,” he said. “We really don’t know if the correlates of risk for one vaccine are the same for another vaccine.”

But Thomas remains optimistic. “The task now is to work out what was different about the protective antibody response, in specifically people with DPB1*13, that could have caused the protection from HIV,” she said. “If this difference could be identified, it may be possible to design a vaccine that could induce an effective response in all individuals.”

Lessons on HIV vaccine efficacy based on genetic differences among individuals may also be extended to vaccine design for other diseases including dengue fever, malaria, and Ebola, added Thomas.