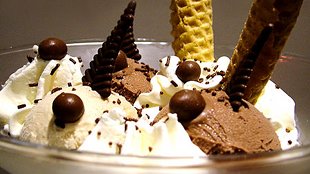 WIKIMEDIA, LOTUS HEADA chronic high-fat diet is thought to desensitize the brain to the feeling of satisfaction that one normally gets from a meal, causing a person to overeat in order to achieve the same high again. New research published today (August 15) in Science, however, suggests that this desensitization actually begins in the gut itself, where production of a satiety factor, which normally tells the brain to stop eating, becomes dialed down by the repeated intake of high-fat food.

“It’s really fantastic work,” said Paul Kenny, a professor of molecular therapeutics at The Scripps Research Institute in Jupiter, Florida, who was not involved in the study. “It could be a so-called missing link between gut and brain signaling, which has been something of a mystery.”

While pork belly, ice cream, and other high-fat foods produce an endorphin response in the brain when they hit the taste...

This dopamine surge occurs in response to feeding in both mice and humans. But evidence suggests that dopamine signaling in the brain is deficient in obese people. Ivan de Araujo, a professor of psychiatry at the Yale School of Medicine, has now discovered that obese mice on a chronic high-fat diet also have a muted dopamine response when receiving fatty food via a direct tube to their stomachs.

To determine the nature of the dopamine-regulating signal emanating from the gut, Araujo and his team searched for possible candidates. “When you look at animals chronically exposed to high-fat foods, you see high levels of almost every circulating factor—leptin, insulin, triglycerides, glucose, et cetera,” he said. But one class of signaling molecule is suppressed. Of these, Araujo’s primary candidate was oleoylethanolamide. Not only is the factor produced by intestinal cells in response to food, he said, but during chronic high-fat exposure, “the suppression levels seemed to somehow match the suppression that we saw in dopamine release.”

Araujo confirmed oleoylethanol’s dopamine-regulating ability in mice by administering the factor via a catheter to the tissues surrounding their guts. “We discovered that by restoring the baseline level of [oleoylethanolamide] in the gut . . . the high-fat fed animals started having dopamine responses that were indistinguishable from their lean counterparts.”

The team also found that oleoylethanolamide’s effect on dopamine was transmitted via the vagus nerve, which runs between the brain and abdomen, and was dependent on its interaction with a transcription factor called PPAR-a.

Oleoylethanolamide levels are also reduced in fasting animals and increase in response to eating, communicating with the brain to stop further consumption once the belly is full. Indeed, oleoylethanolamide is a known satiety factor. Therefore, when chronic consumption of high-fat food diminishes its production, the satisfaction signal is not achieved, and the brain is essentially “blind to the presence of calories in the gut,” said Araujo, and thus demands more food.

It is not clear why a chronic high-fat diet suppresses the production of oleoylethanolamide. But once the vicious cycle starts, it is hard to break because the brain is receiving its information subconsciously, said Daniele Piomelli, a professor at the University of California, Irvine, and director of drug discovery and development at the Italian Institute of Technology in Genoa.

“We eat what we like, and we think we are conscious of what we like, but I think what this [paper] and others are indicating is that there is a deeper, darker side to liking—a side that we’re not aware of,” Piomelli said. “Because it is an innate drive, you can not control it.” Put another way, even if you could trick your taste buds into enjoying low-fat yogurt, you’re unlikely to trick your gut.

The good news, however, is that “there is no permanent impairment in the [animals’] dopamine levels,” Araujo said. This suggests that if drugs could be designed to regulate the oleoylethanolamide–to-PPAR-a pathway in the gut, Kenny added, it could have “a huge impact on people’s ability to control their appetite.”