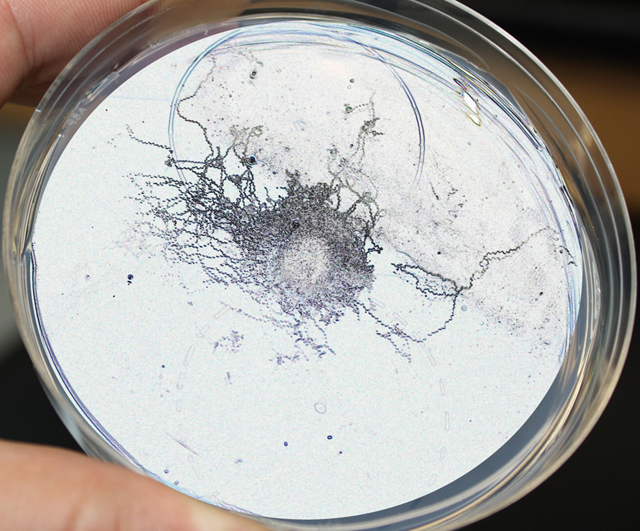 A contrast-enhanced image of an agar plate showing the tracks that worms carved on the surface while migrating towards a magnet placed beneath the solid circle (top). The control circle (bottom) is in dashed lines. Worms began in the middle of the plate.ANDRES VIDAL-GADEAScientists have known for decades that many animals—including birds and sea turtles—use Earth’s magnetic field to navigate over long distances, but understanding how they do so remains a mystery.

In 2015, a group from the University of Texas at Austin reported in eLife that a tiny nematode worm, Caenorhabditis elegans, orients to Earth’s magnetic field using a specific pair of neurons. The findings raised the possibility that C. elegans might be an appropriate model system to dig deeper into how animals sense magnetic fields. But earlier this month (April 13) in a comment published in eLife, researchers from the Research Institute of Molecular...

“Studying animal magnetoreception is really difficult,” says Miriam Goodman, a sensory biologist at Stanford University who is not affiliated with either group. “I think that we will remain in a situation where we have passionate disagreement until we’ve identified what cells or molecules function as receptors, and that still remains unknown,” she adds.

The authors of the original study stand by their results, as they describe in a response also published in eLife.

“We know a whole lot about how animals see the world and hear the world and touch it,” but magnetosensing is still something that nobody really knows much about, Andrés Vidal-Gadea, a behavioral neuroscientist at Illinois State University, tells The Scientist. As a postdoc in Jonathan Pierce’s lab at the University of Texas, Vidal-Gadea combined his interest in magnetic sensing, cultivated during a past summer as an undergraduate researcher, and his postdoctoral focus on C. elegans to investigate whether worms might detect magnetic fields. “I just thought that was really exciting, both because the behavior is fascinating and because there is so much work to be done,” he says.

From my perspective, this [discussion] is all part of the scientific process.

For their 2015 study, Vidal-Gadea, Pierce, and colleagues tested worms’ magnetosensation abilities by first injecting the worms into an agar-filled column oriented vertically or horizontally. They reported that the animals preferentially burrowed in the direction of magnetic north, but only when the column was oriented vertically. Then the authors tested the worms’ responses to a magnetic field generated around a plate on which the animals could freely crawl and determined that animals moved at a consistent angle in relation to magnetic north. The researchers also observed that worms moved toward the side of a plate with a magnet under it. All of the behavioral readouts were dependent upon the worms being well fed and on the proper functioning of a particular sensory neuron pair.

Around the same time that Vidal-Gadea was watching worms in Texas, David Keays of the Research Institute of Molecular Pathology in Austria was on a decade-long hunt for a small, genetically tractable model system to study magnetoreception in the lab. His group tested C. elegans and other nematodes from locations around the world, but had not detected any reliable magnetic responses.

“When Andrés Vidal-Gadea’s paper came out a few years ago, we were really excited because their assay was a little bit different” than anything we had tried before, says Keays. “If we could replicate their results, we could start doing a whole bunch of really cool experiments in terms of analyzing which neurons process magnetic information and . . . we might be able to find the magnetosensor.”

While they followed the original protocols and used animals from the same sources, Keays says, their work differs from the original study in the use of a magnetically shielded room and completely blind experimental design. He adds that his group used double-wrapped coils to generate magnetic fields because they generate the same amount of heat regardless of whether a magnetic field is present or not, which he says is especially important because worms have been shown to respond to thermal gradients.

“The community of magnetoreception researchers has been attempting to develop a robust and replicable assay in animals like Drosophila or Caenorhabditis for decades, and it initially appeared that Vidal-Gadea et al. (2015) did so,” Martin Vácha, who studies magnetoreception at Masaryk University in the Czech Republic and was not involved in either the original study or the follow-up work, writes in an email to The Scientist. “But the inability of some other groups to reproduce the work shows that an assay has not yet been found.”

In their response to Keays and colleagues’ comment, Vidal-Gadea and collaborators point out that in the original study they paid careful attention to temperature and saw no evidence that thermal gradients affected the worms’ movements. They also explain potential sources of discrepancies, including the length of the assays the Keays group performed. Because Vidal-Gadea and colleagues determined that worms that were well fed became hungry and behaved differently after just 30 minutes, they kept their original assays within that time window. Keays and colleagues describe assays up to 60 minutes in length.

Pierce says that Keays’s group did add worthwhile controls, such as the electromagnetically shielded room and a magnetic coil system in which experimenters can flip the direction of the electrical current going through the wires to negate the magnetic field. But, he adds, “there are three types of behavioral experiments, and they didn’t do them exactly the same way we did. They attempted to reproduce, but not replicate, our work. You’re obligated to repeat the experiment the same way it was originally done before you can say that you can’t replicate someone’s results.”

A time-lapse movie of C. elegans nematodes migrating towards a magnet (solid circle). Worms start in the middle of the plate and make their way along the agar surface. About 75 percent of the worms go to the magnet (in this case, 26 out of 37), as opposed to the control zone (dotted-line circle).ANDRES VIDAL-GADEA

Keays tells The Scientist his group has tried the assay with the magnet under the plate with the shorter time period and still seen no effects. “We spent a long time previously trying to get C. elegans to respond to magnetic fields, and not only C. elegans but a whole bunch of other species,” he says. “My personal view is that I don’t think C. elegans are magnetically sensitive or magnetically responsive. I wish they were, but everything that we’ve done suggests that they’re not. I hope I’m wrong, but I don’t think I am.”

“Controversies about magnetosensation are not unusual,” says Roswitha Wiltschko, a now-retired vertebrate behavioral biologist, formerly of Goethe University Frankfurt in Germany, who is not connected to either group. The exchange “will certainly spark discussion, and I think in the long run they have to find out why it wouldn’t replicate,” she says.

“If it’s right, then people will validate it,” says Vidal-Gadea, adding that other groups have successfully replicated some of their assays. “And by all means I anticipate that we won’t get everything right every time, but I definitely know that in our hands worms orient to magnetic fields. From my perspective, this [discussion] is all part of the scientific process.”